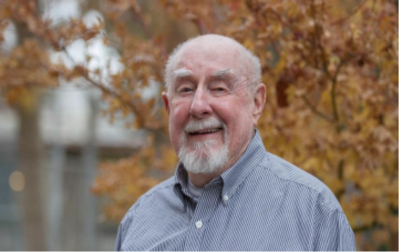 Dan William Patterson of Livermore, California passed away on June 10th, 2021. He passed peacefully with his wife, three children, and eight grandchildren by his side. He was 88. Dan was a selfless friend, a brilliant scientist, a devoted husband, a gentle father, and an adored grandfather.

Dan was a uniquely resilient and courageous man, who braved and won a fight against stage four melanoma 22 years ago.

He began his 60-year career as a nuclear weapons designer at the Lawrence Livermore Laboratory in 1955. He was a gifted and renowned physicist, who pioneered many of our nation’s greatest achievements in nuclear weaponry. There is no doubt that Dan made significant and impressive contributions to national security. His genius was often marveled at and his work attracted frequent praise and recognition, but Dan always remained indifferent to this attention. He was always humbled and grateful to have the privilege of doing what he loved in his work.

Dan is survived by his wife of 61 years, Judy Patterson, and their three children, Scott (Debi Patterson), Tracy (Norm Escover), and Jill (Matt Boeger). Together they have eight grandchildren, Tim, Megan, and Matthew; Trevor, Cole, and Ryan; Grace and John. Dan is continually admired and adored by his family for his gentleness, his patience, his intelligence, his humor, and his unconditional devotion to all of them. Everyone who encountered Dan felt that he had a remarkable goodness about him, which was gentle and light in a way that was almost too perfect for our world. To his family and everyone who was blessed enough to know him, Dan’s memory will forever serve as a reminder of what love is.

Photo Gallery
0 photos Upload a photo
Remembrances
0 entries Submit a remembrance
Memorial service
There will be a Celebration of Life for Dan on October 22, 2021 at McGrail Vineyard located at 5600 Greenville Road, Livermore, CA 94550 (just past Poppy Ridge) from 6-10PM. Wine and hors d'oeuvres will be served. We respectfully request that all planning to attend can provide proof of COVID-19 vaccination, to protect the health and safety of our loved ones.
About this site     Contact us