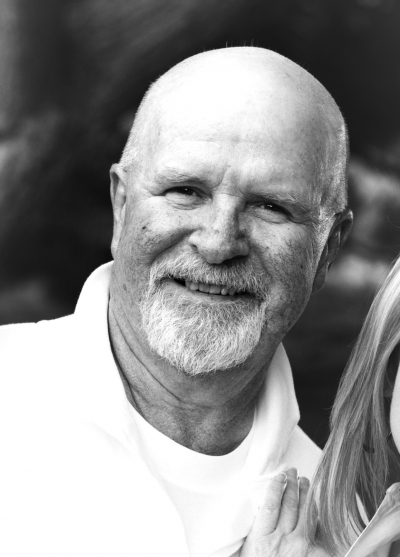 Long-time Pleasanton Businessman, Family man and Friend to many

Dennis was a kind, methodical man, who left his mark on many people with his smile and sense of humor. He was earnest, honest and hardworking, serving Pleasanton's small business community with his first shop Amador Sports & Hobbies, then opening The Sports Den. He also had a small bowling shop at The Granada Bowl. Adding his contribution to local sports, he coached PJFL and Ballistic United teams, too. He turned to real estate appraisal and retired this past July after 35 years as an appraiser, to the end, he ran his own show...But not while working at Crocker Bank in SF, where he met Patricia “Patty” Shorten, who pointed out that orange socks did not go with his brown leisure suit. Pat and Dennis were married in 1965 and moved to Pleasanton in 1968...and that's where it all began, a life filled with many adventures—Yellowstone sojourns; snow skiing (he had a truly graceful style, and you could spot him coming down the mountain from a mile away) and water skiing (had to have a boat, of course, named “Our Waterbed, Pleasanton”); camping (mmm, mmm, mmm, french toast on the griddle); Bed & Breakfasting (never afraid to make friends with other people B&B'ing too and share a dinner or two with new friends); and we must not forget—FISHING!! Dennis was an insanely skilled trout fisherman, with Burney Falls being a favorite spot. A true forever-fan of our SF Giants and 49ers (win or lose) and an adorer of music—Peter, Paul and Mary; Neil Diamond; John Denver; The Boston Pops; Fleetwood Mac...Dennis and Pat never stopped finding a new road to travel. If you had a question about how to get somewhere, these two knew the way. Married 57+++ years, Dennis passed away on December 26th—giving him one more chance to watch 'It's a Wonderful Life' on Christmas Day, for the 45th time—in Gardnerville, NV, where he and Pat lived since 2001, surrounded by mountains and Shelties.

Dennis is survived by his wife, Pat; his two daughters, Kris (Mahoney) Foscalina of Livermore and Sandy Mahoney of San Rafael; his two grandsons, Jake and Shawn Throckmorton (of Portland and Southern California), and three nephews, Kevin and Michael Mahoney of Sydney, and Randy Knoch of Salinas. He is preceded in death by his older brother, Michael, of Sydney; his younger sister, Patty (Knoch) Hiroshima, of Salinas/Bandon by the Sea, and his mother and father, Dorothy and Nelson Mahoney of La Cañada/Belmont. Also, awaiting him at the pearly gates where he'll darn-sure be welcome are his beautiful German Shepherds—Torin, Rebel, Major & Romel, and his favorite Shelties, Blazer and Dusty.

Friends from many, many years ago, blessed to have been touched by this great Irishman, have come forward to share their fond and funny memories of Dennis with his family through posts and calls. For this, we are truly grateful. A Celebration of Life is being planned for this spring when family and friends can travel safely to be together. ~ Rest in Peace, Dennis, Honey, Daddy-O! ~ 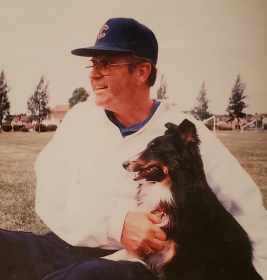 Remembrances
1 entry Submit a remembrance
From Sandy Mahoney
Jan. 9, 2023
Dad And Blazer
About this site     Contact us