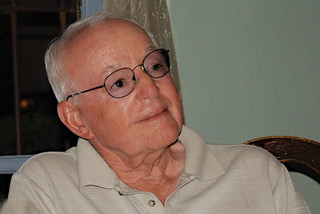 Don enlisted in the USAF in 1952 and, on holiday leave in 1954, returned to McConnelsville to marry his lifelong sweetheart “Susie” (Carolyn Sue) Perkins (deceased 2011) on Christmas night. Together they raised four children who all survive: John Edward, Sheri Sue, Christopher Bruce, and Amy Jean. Don is also survived by five grandchildren and one great- granddaughter.

Don was a hard worker and entrepreneur from an early age, starting with a boyhood paper route, with earnings fastidiously saved, and later teen swim instruction and lifeguarding. He mostly grew up an only child until his widower father married Mary Ray, enlarging Don’s family circle with older step siblings Vivian Ray, Francis Moore (Ray), and George Ray, all deceased.

Don graduated with an M.B.A. from Pepperdine University, preceded by preparatory studies at Baylor University and the Air War College where he focused on math, electronics, and management. In his career, he established new satellite command centers from the ground up, managed inspection and quality control across broad geographies, and did much aerospace teaching. After the Air Force, he enjoyed a second career at Lockheed Missiles and Space in Sunnyvale, CA.

Don was progressive in religious thought and led youth groups in the Methodist church and the YMCA. Two people credit him with saving their lives, one from drowning and one from crashing a plane.

An expert navigator, he wrote: “It is very satisfying to see your destination ahead at your predicted time after navigating for hours over a large mass of water.” This sentiment captures Don’s patience and forethought, for which he was known. He was an ever mature person and a thoughtful and caring man with a dignified demeanor and dutiful disposition.

Don especially loved golfing, gardening, traveling, and simple cooking. He played saxophone in his youth, tried his hand at winemaking, enjoyed reading, kept up his dancing, and visited the piano throughout his life, including serenades at Sunol Creek Memory Care right up to the last. He and Sue grew up together, their beginning marked with a flower exchange in kindergarten, and their years stretched through a long retirement rich with treasured living. The family’s fondest wish is for them to reunite in their favorite way on the 19th hole.

Honoring Don’s quiet nature, the family will hold a private remembrance. In lieu of flowers, please raise a toast or enjoy a tomato, as Don would have.