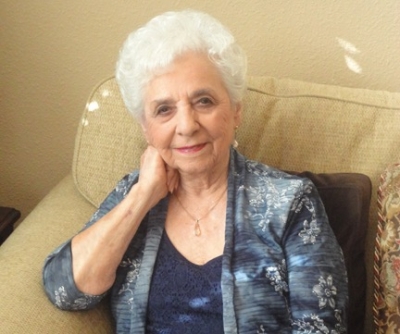 Eleanor was born in Oakland, CA to John and Jennie Laplagne. She graduated from Oakland Highschool. After high school, Eleanor got her cosmetology license and then worked as a hairdresser. She would often talk about taking the streetcar to the USO dances, where she had so much fun meeting the servicemen.

Eleanor married Frank D. Yunker on June 1, 1947. They had 2 children, Mike and Nancy. Frank died January 23, 1975. Eleanor then went to school to become a nurse’s aide. She did not think she would marry again.

However, through a mutual friend, she met Bill Wilson. After only 3 months they were engaged and married on April 17, 1977. Eleanor and Bill belonged to a retired firemen’s group and enjoyed traveling with their friends to Graceland, Alaska, Canada, the Panama Canal, the Mississippi, and many other places.

Our mom, grandma, great-grandma, and friend will be missed by so many!

Mom was, as we were, so very blessed that she was able to see both granddaughters get married, and to be able to enjoy her 4 great grandchildren who brought her such happiness. In lieu of flowers, donations can be made in Eleanor’s name to your local Veteran's or Alzheimer’s organization.