Eric Christian Larson of Pleasanton, CA, passed away on January 2, 2016, at the age of 62 after a long battle with cancer. He is predeceased by his parents Hugo and Kari Arentzen Larson and stepson J.R. Larson. He is survived by Anne (Sam) Larson, his wife of 35 years; daughter Sharon Esthena Larson Starnes, son-in-law Nick Starnes, and step grandson Cooper of Chico, CA; and daughter Whitney Larson, of Las Vegas, NV. Eric is also survived by his sister Ann Larson of Essex Junction, VT; sister Linn Barlow, brother-in-law Renn Barlow, niece Esthena and nephew Graham of Middlebury, VT; and brother Jens Larson, sister-in-law Maggie Larson and nephew Kyle of Phoenix, AZ. Eric is also remembered fondly by numerous cousins across the country.

Eric was born in New York and grew up in Ramsey and Ridgewood, NJ. He graduated from Ridgewood High School and studied at Hartwick College before getting a degree in economics from the University of Massachusetts.

Eric loved music. He performed in several rock bands while in high school and then in the late 70s he helped create and manage WoodDancer, a musical duo comprised of two close high school friends that toured the country for several years.

Drawn in by the participation of his son and daughters in Pleasanton youth soccer leagues, Eric and Sam eventually became referees as well as board members of the Pleasanton Rage soccer club and Pleasanton Soccer Referee Association. Eric helped run tournaments that enriched the lives of thousands of children in the Tri-Valley area. He was passionate about maintaining high levels of sportsmanship among players, coaches and parents. He was also a tireless mentor to both youth and adult referees and an unwavering advocate for those taking on the often thankless task of being a soccer official.

Eric had a varied career in business. He started in insurance and auto sales, and while serving as a mortgage broker he became that guy everyone at the office turned to for computer advice. This led to him becoming an IT specialist for a number of real estate-related companies.

Ericâ€™s hobbies included collecting, sharing and sampling craft beer and fine Scotch & Whiskeys. He was an audiophile who loved to develop elaborate stereo systems. He loved the 49ers. He was a loyal father, husband, and friend; fondly known as â€œcoachâ€ to his longtime buddies. He was fun-loving and gregarious, but also a man of great integrity who always demonstrated equally high levels of competence and humility in all his endeavors.

At his there will be no service, but a party in his honor will be held on May 14 in Pleasanton. In lieu of flowers, please instead donate in Ericâ€™s name to a youth charity of your liking. 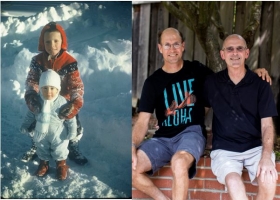 Remembrances
2 entries Submit a remembrance
From Jens Larson
Feb. 23, 2016
Dear Eric, You are and always were a great big brother. As much as I would have liked to have you around forever, now I get to look up to you in a new way. By the way, I never thanked you for training mom and dad so well. You wore them out and they ...
Read more
About this site     Contact us