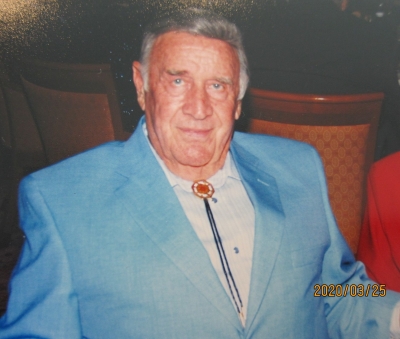 He was born May 10, 1930 on a mountainside farm in Schonenbuch, Switzerland. Gumel was the oldest of 6 children. After his father’s death, Gumel had to help his mother with the care of his younger siblings. When his siblings were old enough to work, Gumel set out for America on a ship via Canada. He worked on a farm outside Montreal to help support the family back home while learning English. He then set out for Vancouver with his longtime friend Paul Von Euw and worked in a papermill for a year, finally ending up in Pleasanton where he had an Aunt, Josephine Wipfli. Gumel spent the remainder of his life in Pleasanton.

He met the loving and outgoing Bertie Christensen, they married and they had a son named Frank Jr. Bertie who preceded Gumel in death in 1999. Gumel worked first at Hansen and Geiger Dairy then later with his friends Frank Auf Der Maur and Konrad Rickenbach at Pleasanton Cabinet Shop. The Cabinet shop closed down in 1981, but the friendships remained with weekly lunches and Swiss club events.

In addition to working together the families enjoyed many vacations all over the world traveling with the Jolly Swiss Group and included many return visits to Switzerland to visit family and attend Swiss music events. Later in life Gumel had a wonderful relationship with Anne Marie Reichmuth from Unterageri, Switzerland. They were great companions enjoying more travel, Swiss events, and card games with friends.

Frank (Gumel) is survived by son Frank Jr. (Diane), grandchildren Courtney Park (Curtis), Bailey, Rainer, one great grandson (Charlie) and a sister, Therese Steiner along with many nieces and nephews all still residing in Switzerland. No services are scheduled at this time.