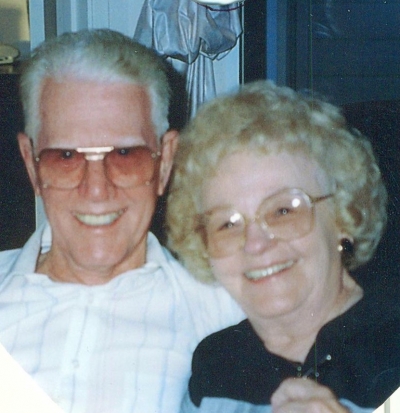 Freda Rose Wall (Brandenburger), a woman whose love, grace, kindness and patience extended through five generations, went home to be with the Lord on Saturday, Feb. 27. She took her last breath in peace at home surrounded by loved ones and holding the hand of her beloved husband of 78 years.

Freda was born on July 10, 1918, in Gibson, Montana, to German and Austrian immigrants Amelia and Frederick Brandenburger. She was the first of six children: Anne, Margaret, Freddie, Helen, and Sonny. When she was six, her family left Montana and moved to Southern California. Freda attended Huntington Park High School, which incurred extensive damages during the Long Beach earthquake of 1933. Newspaper reports from the time state that had students been inside during the quake, they would not have survived. As a teenager, one of Fredaâ€™s favorite pastimes was playing tennis with her sister Anne.

When she was 17, she met the love of her life, a young car mechanic named Glen Wall. They met at a gathering of mutual friends. Their love blossomed quickly, just like the gardenias Glen used to bring her when he picked her up for dates. They were married on August 27, 1937, in Santa Ana, Calif. A few months later Freda was pregnant. In July 1938, Freda gave birth to their only child, a daughter, Joyce Helen Schilling (Wall). Freda nearly lost her life during a difficult childbirth, but she proved to doctors then, what she would continue to prove over the next 77 years: Freda Rose Wall was one strong woman.

Joyce was the center of Freda's world and the apple of her eye. Freda lit up anytime her daughter was around.

When Japan attacked Pearl Harbor in 1941, Glen was drafted into the Army and Freda became one of the thousands of "Rosie the Riveters" joining the workforce. She went to work at an avocado plant and later at a delicatessen.

In 1958 and 1960, the amount of love and care she brought into the world grew exponentially with the birth of her granddaughters, Glenda Susan Schilling and Cynthia Jo Hinds (Schilling). Her world now revolved around all three women in her life. She doted on her granddaughters and was very much involved in their upbringing. She was the matriarch of the family, and her compassion and patience made her the perfect mother and grandmother.

In 1981, Glen and Freda moved to Northern California into their forever home in Pleasanton. They were not alone in their move, as Joyce and her husband Kurt Schilling were already living in the area. Her granddaughters were now married, having babies of their own, and also living locally.

During the late 1980's and early 1990's, Freda volunteered at the Hope Hospice Thrift Shop in Pleasanton and helped care for her great-grandchildren who lived near and far.

Until recently, Freda spent much of her leisure time at the Stoneridge Mall people-watching, chatting every week with her hairdresser Pat at An Elegant Touch off Main Street, and exercising with fellow senior citizens at the Pleasanton Senior Center.

Freda was an amazing woman and addition to this Earth. She was quiet and reserved, but mighty. If love could move mountains, she could have formed the Sierras. Her family was her world, and she took every opportunity to be actively involved in their lives.

She could do amazing work with her hands. Whether it was in the form of china painting, needlepoint or cooking, she was quite skilled. She could bake the perfect lemon meringue pie, with a meringue so high and fluffy no one could compete. Her chocolate, walnut and specialty sunshine cakes were family favorites. She could even use two heavy cast iron frying pans simultaneously to make the most delicious Swedish pancakes, which her family called "thin pancakes," on any given Saturday morning. She could bluff her way to a near-perfect game of gin-Rummy, but also loved to play less difficult card games like Five Card Stud, Old Maid, or Go Fish with her grandkids. She could successfully solve a Wheel of Fortune puzzle with two letters on the board, or solve any â€œMurder, She Wroteâ€ mystery before anyone else in the room.

Most importantly, her smile or the touch of her hand could calm even the most devastating troubles. She was a natural-born peacemaker and problem solver. At any given time, if you sat next to her, she would take your hand in hers and pat it with her other hand as if to say, "It's okay---everything will be okay. I love you." To say her family will miss her is an understatement.

She is survived by Glen Wall, her loving and caring spouse, who fondly called her, â€œDuxx.â€ He moved heaven and earth to personally care for her in the comfort of their own home during her final years. Their love is truly everlasting an eternal. She is also survived by her sister Anne; daughter, Joyce Schilling; two granddaughters, Glenda Schilling and Cynthia Hinds; five great-grandchildren, Christina Andring, Kurtis Jones, Michael Jones, Brandon Andring, and Amelia Leonard; and 11 great-great grandchildren.

Memorial service
At her request, a private family service was held. As an expression of sympathy, memorial contributions in lieu of flowers may be sent in her name to Hope Hospice. Please visit them at http://hopehospice.com/donate-now/ways-to-donate/ OR to call or more information:(925) 829-8770
Make a donation
http://hopehospice.com/donate-now/ways-to-donate/
About this site     Contact us