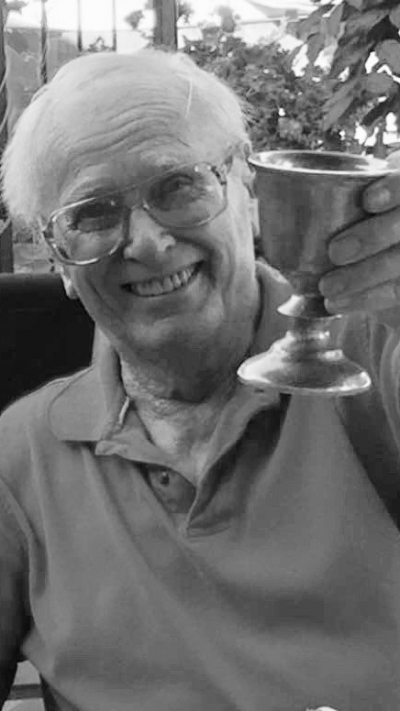 George C. Mayo, known as a kind and devoted Christian, went home to his savior Feb. 20, 2020. He was 88. George and his wife of 64 years, Dorothy, moved to Pleasanton in 1969 and still live in that same Pleasanton Valley home. They raised their family of five children there, while George ran Mayo Radiator in Oakland, a business he purchased from his father. At its height, he was distributing radiators and accessories to more than 2,700 customers, prompting him to purchase the first computer installed into an automotive business in Oakland in 1983, according to a trade magazine. He enjoyed more than 30 years in retirement, traveling the country with Dorothy, camping in a trailer. The family also enjoyed outings to their second home in Arnold where he could pursue his passion for fishing and spending time with the family. He also traveled to Alaska to fish. He and Dorothy sang for decades in the choir at GraceWay Church. He marched in the church’s Balloon Platoon as well as participating in weekly Bible studies. In retirement, he spent nine years as a regular volunteer at Stanford ValleyCare hospital in Pleasanton. He also enjoyed golfing and scored two hole-in-ones. He was known for his sense of humor, often expressed in puns. He was born in Oakland, the only child of Clyde and Helen Mayo. He grew up in Oakland and then served in the Army Corps of Engineers. He attended the University of California, Berkeley before venturing into the business world. He is survived by his wife, Dorothy Mayo; children Lou Ann Perry of Redlands, Edward Mayo (Tina) of Tracy, and Christina Anderson of Redding. He was predeceased by his children James Mayo and Laura Mayo. He also is survived by 12 grandchildren: Benjamin Wigley (Maricris), Sadie Conoty Vargas (Christie), Kevin Mayo, Hallie Mayo, Kayla Ferreira (John), Hannah Mayo, Elizabeth Perry, Emily Perry, Emma, Jacob, Sarah and Daniel Anderson and five great-grandchildren: Mark Gulfan, Kaitlynn Wigley, Annalise Jordan, Everly Jordan and Johnny Fowler.