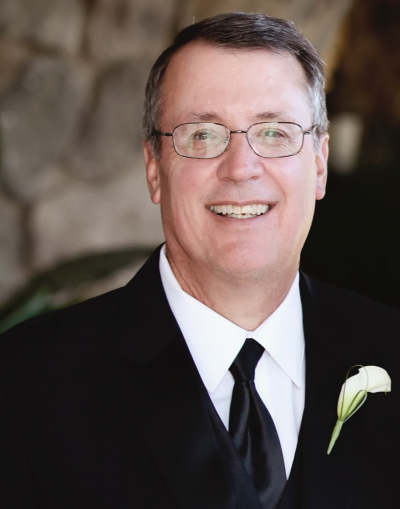 After a 2 year battle with a rare form of leukemia, Jerry (Don't call him Gerard!) Fourie passed away with his family around his bedside on December 16, 2022. Jerry was born to Margaret and Alfred Fourie in San Francisco on August 11, 1953. He spent his younger days in South San Francisco graduating from St. Veronica's School in 1967 and Serra High School in 1971 (where he was the recipient of the Bank of America Science Award). He attended the University of San Francisco and graduated in 1975 with a BS in Business Administration. At USF, he was a member of the Delta Sigma Pi Fraternity. He retained many lifelong friends from his schooling days (in fact, every year since 1984, he played in the annual "Whackers and Hackers" golf tournament with his Serra buddies). On March 17, 1973, he had his first date with a USF classmate, Michele Dallas. Jerry knew she would follow him through life (at least that's what Michele told him!) and they married on June 11, 1977. At their wedding reception, Michele's father made a point of saying, "I'm 78 years old, I want grandchildren!" Within 2 years, their first daughter, Gabrielle, was on the way (born in early 1980)! Her sisters Lauren and Molly followed in 1982 and 1986, respectively. After living in Novato for 6 years, the family moved to Pleasanton. Jerry became very active in coaching his daughters’ soccer and softball teams. He started in 1988 with Gabrielle in the Pleasanton Girls Softball League and the Pleasanton Girls Soccer Association and finished coaching with Molly in 2002. For his efforts, he was named to the PGSL Hall of Fame in 2005.

His work career began in 1975 as a Management Trainee at Macy's San Francisco in charge of the Wine Department. Jerry and Michele started their own business (J & M Home Fashions) and grew it into a very successful venture until they sold it and retired in 2018. But, even in retirement, he just couldn't remain idle and took a part-time position as the starter at the Pleasanton Golf Course.

Jerry was a loving husband, dedicated father, and adored grandfather. He was an outstanding friend to everyone who knew him, always the life of the party, and an eternal optimist. When the leukemia struck, he remained upbeat and showed everyone how to handle adversity. If you were having a bad day or just not feeling right, all it took was a conversation with Jerry and things always looked better. He was one of a kind and a true original.

There will be a Celebration of Life at St. Augustine's Catholic Church, 3999 Bernal Ave., Pleasanton, CA 94566 at 11 AM on Saturday, January 28, 2023. In lieu of flowers, consider donating to give.stanford.edu, Dr. Jason Gotlib Research Fund (Other Stanford Designation).

Photo Gallery
0 photos Upload a photo
Remembrances
0 entries Submit a remembrance
Memorial service
There will be a Celebration of Life at St. Augustine's Catholic Church, 3999 Bernal Ave., Pleasanton, CA 94566 at 11 AM on Saturday, January 28, 2023.
Make a donation
In lieu of flowers, donate to give.stanford.edu, Dr. Jason Gotlib Research Fund (Other Stanford Designation).
About this site     Contact us