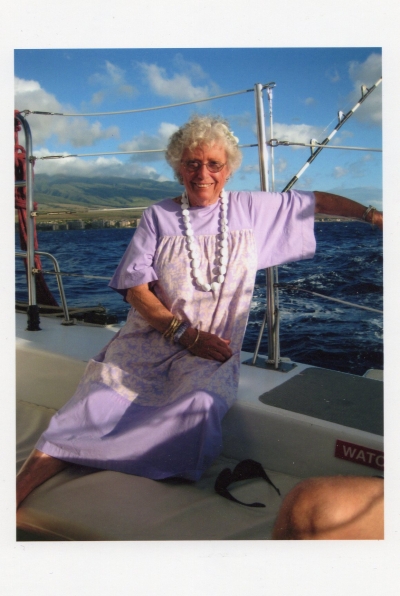 Helen June Yelkes, a resident of Pleasanton and former 43-year resident of Hayward, passed away peacefully on May 7, 2015 with her family at her side. Helen was 88 years old, passing 2 weeks short of her 89th birthday. Helen's husband of 50 years, Fred Yelkes, predeceased her in 2000. Helen is survived by three daughters, Michelle Yelkes-Paul (Mike Paul) of Pleasanton; Maureen Hayes (Ken) of Twain Harte and Mitzi Shaffar (Dan) of Pleasanton as well as five grandchildren: Matthew, Joshua, Shannon, Dane and Mallory. Helen is also survived by her younger sister, Dorothea Strandberg (Ed) of Keizer, Oregon. Helen was born in Portland, Oregon to Joe and Mamie Dewey on May 25, 1926. Helen attended Lindfield College in McMinnville, Oregon.

Helen was an active wife, mother and homemaker who dedicated herself to her husband and daughters. Helen loved flowers and was an avid gardener who designed and grew beautiful flower beds. She loved to sew and especially enjoyed designing and creating stitchery.

Helen and her husband Fred enjoyed traveling. She visited all 50 states. For over 40 years, Helen and Fred traveled many times to all of the islands of Hawaii, cruising from San Francisco to Honolulu on the Matson Lines' SS Lurline. She and Fred traveled to many locations in North America, Europe, Asia, North Africa, the Caribbean, the British Isles and the Mediterranean.

Helen loved to attend, support and celebrate the activities of her grandchildren. She loved to watch her grandson Dane play soccer and was a Ballistic Soccer supporter. Helen will be dearly missed by her family and friends.