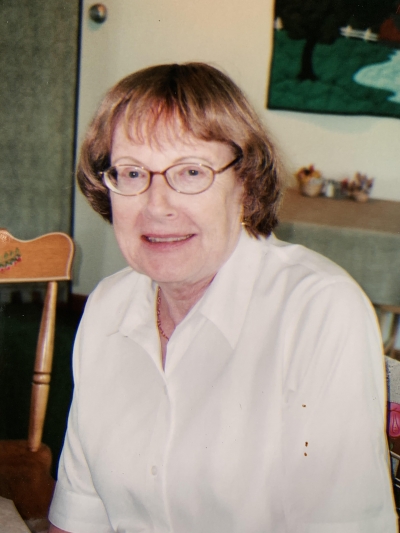 Helen Pearlstein (nee Gardner), a resident of Alamo, died peacefully on February 3, 2020 after a bout with an aggressive knee sarcoma. She was 87 years old. She lived in Danville, and then in Alamo for a combined 44 years. During that time her focus was taking care of her combined family and working as a volunteer at the Danville Library. At the Library she served in virtually every capacity, including several terms as President. She and a friend originated the Friends of the Danville Library Endowment in 1998 that reached 1 million dollars in early January 2020.

Mrs. Pearlstein was born in Lancaster, Pennsylvania and grew up in Philadelphia. She graduated from Ursinus College in 1954 with a degree in history. She married John Isely in 1957 and they moved to San Diego with their two children, Ann and Brian. She covered local news for a twice-weekly newspaper, and later worked for Hydro Products, San Diego Magazine, and as editor of the award winning San Diego Constructor, a trade magazine.

Following her marriage to Don Pearlstein in 1976, and a move to northern California she worked for a time at the Dublin Public Library.

Mrs. Pearlstein’s interests, even as a child, were ancient history, archaeology of the Middle East, reading and writing. She and her husband, Don have been fortunate to be able to travel to 7 continents. Classical music has always been a source of joy.

Photo Gallery
0 photos Upload a photo
Remembrances
0 entries Submit a remembrance
Memorial service
A memorial service and labyrinth walk at Saint Timothy’s Episcopal Church in Danville are planned for 2pm on March 15
Make a donation
Contributions to the Friends of the Danville Library Endowment are welcome.
About this site     Contact us