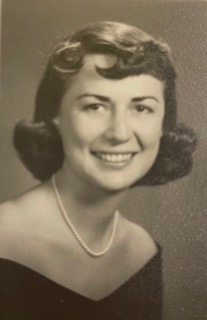 Irene (Kolofoles) Still, age 88, of Seal Beach and Pleasanton, passed peacefully on the evening of January 21, 2022, after several years of cognitive decline.

Irene Still grew up in a quaint New England town, Methuen, which is located just north of Boston. She was a graduate of Endicott College, situated on the scenic shores of the Atlantic Ocean in Beverly, Massachusetts, and a graduate of Keuka College in upstate New York. The acclaimed field study programs offered by both colleges, as well as their proximity to an ocean and a lake, solidified her decision to matriculate there.

While Irene was engaged in college-related fieldwork in Rochester, New York, she was housed in one of the dormitories at Colgate Rochester Divinity School. At Colgate she met and later married seminarian Howard Lewis Still. Being the wife of a minister was not something fun-loving Irene had ever envisioned for herself! But her chosen profession was Social Work, and they shared a conviction for serving. They were married at the Divinity School, and the President, Dr. Sanders, officiated. During their early years of marriage, Howard completed his seminary studies at Colgate while Irene was simultaneously employed in the Medical Social Service Department of Strong Memorial Hospital which is affiliated with the University of Rochester. Upon graduating from Divinity School, Howard was ordained into the Presbyterian Church. During their years of service in this Buffalo, New York suburb community, Irene attended graduate school at the University of Buffalo and was employed in the Social Service Department of Buffalo State Hospital.

The Stills moved to California in 1960 when Howard was called to organize a new Presbyterian Church in the emerging community of Diamond Bar. In their thirteen years of residency in Diamond Bar, the Stills established a landmark Presbyterian Church as well as a lifetime of friendships. Irene described those years as their most memorable. Raising their two wonderful children, Rebecca and Timothy, in the environs of Diamond Bar was by far their greatest shared joy.

In 1976 Howard decided to pursue a career in the secular world. He accepted a position as Vice President for Development at California State University, Long Beach. The family then moved to neighboring Seal Beach. He served in that capacity until his untimely death succumbing to leukemia in 1986.

As life unfolded for Irene, Howard’s dear friend, Carl Meyer, was also left a widower. The Stills and the Meyers had been friends for many years. Carl had served as a church elder in Howard’s Northminster Presbyterian Church in Diamond Bar, and Howard was noted for saying about his admired friend, “There’s only one Carl Meyer.” Carl and Irene both shared the sorrow of losing a beloved spouse. Carl and Irene shared a charmed life. They traveled the world. They enjoyed frequent visits with their children. They shared religious convictions and values. But as fickle fate would have it, Carl wasn’t able to keep that promise. Irene was once again widowed when Carl died of cancer after only six short years of marriage.

After Carl died, Irene elected to give thanks for the two wonderful men she had married and loved. Irene’s children and daughter-in-law, Michelle Still, strengthened her with their generous love and understanding. She was immensely grateful for all of them. Grandchildren Brooklyn, Logan, Jackson, and Christian were the sunshine of her life. She could not have loved them more.

Irene was employed for almost twenty years at California State University, Long Beach, where she served as Supervisor of Special Collections and the University Archives. She was a natural teacher and loved introducing the treasures of her department to curious University 100 students. Many stayed in contact with her after their graduation. She established the Howard L. Still Memorial Music Scholarship at the University that supports and encourages talented vocal musicians in their pursuit of a professional career.

Throughout her life and in every situation, Irene took time to get to know the people she encountered. Whether the staff serving her favorite eggs benedict at Blackboard Bistro, or the gentle, caring people who helped her in her later years, Irene always found a way to make everyone around her feel special. She will be remembered as a genuinely kind and unselfishly generous soul.

Irene is survived by her two children, daughter-in-law, and four grandchildren. She was preceded in death by her parents, husbands, sisters, and brother.

There will be a private ceremony and day of remembrance of Irene’s life in Southern California on Sunday, February 20, 2022.

In lieu of flowers, gifts may be made to the Still Meyer Rare Book Memorial Endowment at California State University, Long Beach. https://giveto.csulb.edu/LIB10