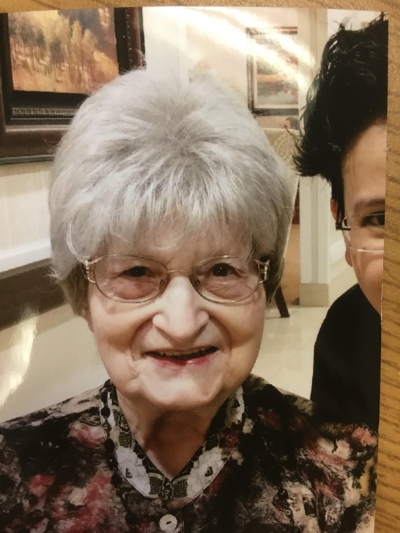 Isabel Cattalini passed away peacefully on Jan. 9, 2017. The former Isabel Silva was a Pleasanton native and a graduate of Amador Valley High School, class of 1946. She was the loving wife of Armand Cattalini, also a Pleasanton native, who preceded her in death in 2009. They were married for over 62 years. Armand and Isabel met while Armand was serving with the U.S. Army at Camp Parks during WWII. Armand was based stateside partially due to the death of his brother Alfred Cattalini, who was killed in action during a parachute jump while serving in the Philippines with the 511th parachute infantry regiment, 11th Airborne division the previous year, which left Armand the only surviving Cattalini. Isabel lived long enough to see Alfred's plaque enshrined on the recently dedicated Veteran's Memorial in the Pleasanton Pioneer Cemetery. Armand and Isabel lived in downtown Pleasanton their entire married life, and Isabel gave birth to their only child, Cheryl (Caraballo) in 1954. Cheryl is also a graduate of AVHS.

Isabel was the daughter of Portuguese immigrants, Frank and Angelina Silva, born on Feb. 23, 1928, and was one of a family of five children, consisting of brothers and sisters Mary, Emily, Josephine and John. The Silva faily lived on a small ranch just off of Tassajara Road on the north side of Pleasanton. She attended elementary school in the one-room Antone schoolhouse nearby. She attended and graduated Amador Valley High School in 1946. She attended her 70th class reunion in September, 2016. While in high school, she worked part time at the First National Bank downtown, where she eventually became a full time teller. She worked for Mr. Warren Harding, who founded the original Pleasanton Rose Show at the bank. She was very proud that her daughter Cheryl became the recipient of the Best of Show award for the Rose Show in 2015.

Being a lifelong San Francisco Giants fan, she thoroughly enjoyed watching the three World Series titles that the team finally achieved during her lifetime. Isabel and Armand were also avid San Francisco 49'er faithfuls, and enjoyed the championship years for that team as well. She was an avid reader and one of her favorite novelists was Mary Higgins Clark, and was a riveted follower of the Watergate Trials during the Nixon administration, both on TV and in the newspapers. In her lifetime, she was also hoping to see the first, qualified woman President.

While living out her life at Pleasanton Nursing, she enjoyed the frequent visits from her daughter Cheryl, and they would watch Giants baseball, get visits from friends and family, and pet visits from Cheryl and Keith's golden retrievers, Flash and Luna, along with other friend's pets as well.

Photo Gallery
0 photos Upload a photo
Remembrances
0 entries Submit a remembrance
Memorial service
There will be a celebration of Isabel's life at 1 p.m. on Saturday, Feb. 25, 2017 at the Pleasanton Nursing and Rehab Facility, 300 Neal St. All are invited to attend.
About this site     Contact us