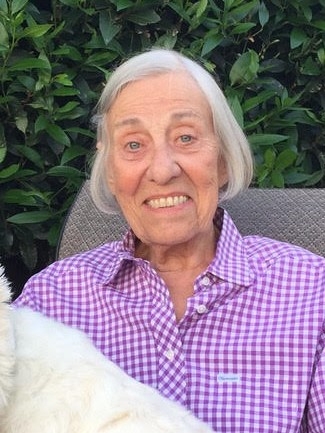 A long-time resident of Pleasanton, Jacque Holder loved serving her Lord in church and in her community. Jacque went home to be with her Savior on June 16 after battling dementia. She was 84. She and her late husband of 58 years, Carl Holder, lived in Pleasanton from the early 1960s until her death except for five years spent living abroad. They were active members of the Presbyterian church throughout their time in Pleasanton. Jacque led Challenge, the youth group at church, for several years. She also participated in Bible studies throughout her life. She was born in Oklahoma City, OK to Odessa Myrl Beard Caudle and Leo Hardin Caudle. She graduated from Capitol Hill High School and married fellow Capitol graduate Carl Holder on April 26, 1958. They had three daughters that she raised in Pleasanton. She loved entertaining people in her home and was known for her homemade hot fudge sauce. Her friends and family knew very well that she was not a morning person. NO calls before 10 am. Later in Carl’s career as an airline pilot, Carl transferred his flying base to Berlin where he and Jacque lived for five years. He captained jets for Pan Am and they were there when the Berlin Wall came down in 1989. All three daughters visited them while they were based in Berlin. Her daughters have favorite memories of the times spent at the family’s mountain vacation home in Blue Lake Springs near Arnold that Carl built. Another favorite memory was the full family of 15 people traveling to Kenya for a safari. After Carl retired from the airlines, they traveled the country in their fifth-wheel trailer. They took advantage of Carl’s job to travel widely and the family enjoyed annual trips to Hawaii for vacation. She is survived by her daughters: Karen (Brooke) Burton of Highlands Ranch CO, Carla (Jeff) Land of Diablo CA, Kelly (David) Elkins of Portland OR; Grandchildren: Kelby (Kurt) Ewert of Liberty MO, Marley (Alex) Dagner of Portland OR, Thatcher Burton of Fort Collins CO, Jennifer (Mike) Anderson of Fenton MO, Jessica Land of Portland OR, Emily Elkins of Portland OR and Paige Elkins of Portland OR; and her great-grandchild Karson Carl Ewert of Liberty MO.

Photo Gallery
0 photos Upload a photo
Remembrances
0 entries Submit a remembrance
Memorial service
A memorial service celebrating the life of long-time Pleasanton resident Jacque Holder will be held at 3 p.m. Friday, Oct. 16 at GraceWay Church, 1183 Quarry Lane, Pleasanton. Capacity will be limited by COVID-19 regulations so reservations are required. People interested in attending can reserve seats at www.gracewaylife.org. It also will be live streamed on GraceWay’s Youtube channel.
Make a donation
GraceWay Church, 1183 Quarry Lane, Pleasanton, 94566. www.gracewaylife.org
About this site     Contact us