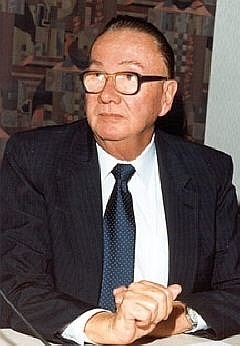 Jim Willows, a loving husband, father and man of service to his community, passed away quietly at his home in Pleasanton on Saturday, June 21, 2014, while surrounded by family and friends. He was a very loving and passionate person who worked hard to be a role model for those who looked up to him. Born in Vallejo in 1931, the only son of James Willows, Sr. and Marguerite Patterson Willows, he grew up in the Bay Area and studied Physics at UC Berkeley, where he was a champion on the competitive chess team. He began his career as a nuclear physicist at the Lawrence Livermore Lab. In 1960, he lost most of his vision due to a degenerative eye disease and continued the rest of his career as a computer scientist at the Lab before retiring in 1993. Jim was a deacon in the Presbyterian Church for many years and after losing his vision, turning his passion for helping others toward the blind community, serving as Vice President and then President of the National Federation of the Blind of California. During his years of service, he accomplished many things, including co-authoring SB105, a state bill to improve services for the visually impaired in California, and he received several awards from the governor?s office. After retirement, Jim spent most of his time with his family and two dogs, but he continued to work toward his life-long goal of improving quality of life for the visually impaired. His favorite hobbies were listening to books on tape, cheering for the San Francisco Giants and Cal Berkeley sports teams, and staying abreast of current events on news radio. In the last few years, his health and mobility gradually declined due to a battle with cancer as well as his age, although he fought vigilantly and never lost his strong positive spirit. He is survived by his wife Mary Willows, and his sons and their partners, Jimmy Willows and Mike Kawalek, and Donny and Katie Willows. He will always be remembered as a strong and caring person.

Photo Gallery
0 photos Upload a photo
Remembrances
0 entries Submit a remembrance
Memorial service
Memorial Service Saturday, June 28, 2014, at 11 a.m. Reception following at Graham-Hitch Mortuary, 4167 First St., Pleasanton, CA.
Make a donation
In lieu of flowers, he wished for donations and contributions to be sent to the National Federation of the Blind of California, Inc.
About this site     Contact us