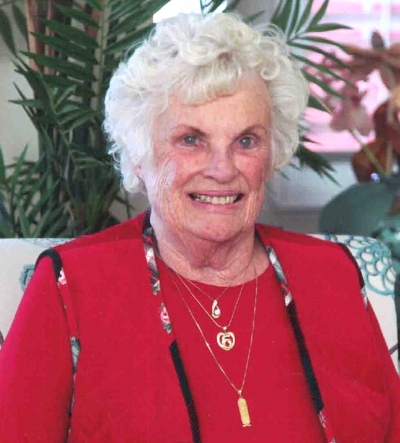 Jean Patricia (Jean) Zoernsch was born on 22 April 1938 in Chicago, IL to William Frederick and Elizabeth Mary (Kerr) Zoernsch of that city. Her sister, Sandra Lynn (Sandy), was born five years later. At the age of 16, following her sophomore year in HS, Jean’s family moved to San Jose, CA where she completed high school and attended San Jose State University. Majoring in Primary Education and working her way through college, Jean was active in her sorority and graduated with Honors in 1960. After teaching for two years in the San Francisco Bay area, she decided to use her teaching credentials as a ticket to see the world. Applying for the DOD Dependents School System in 1962, Jean was posted to Baumholder, Germany where she taught first grade.

Soon after her arrival, Jean met her husband to be, Bob, who always declared it was “love at first sight”. Jean, however, maintained that she wasn’t so sure about that “cocky paratrooper”, and besides, she had come to Europe to travel, not “to find a husband”, as Bob often joked. At any rate, the stars aligned and they became engaged among the flowers of Luxembourg Gardens in Paris and began to plan their wedding which led to more than 58 years together.

Jean and Bob soon learned of the resiliency required of all military families as their June 1963 wedding plans were postponed to 7 July when Bobs artillery battery, which he commanded, was selected to join a NATO Honor Guard to fire a 21 gun Presidential Salute for President John F. Kenney on the occasion of his first official visit to Europe. Little did they know that, six months later, Bob would take his battery to Paris; this time, to fire a Presidential Salute at NATO Headquarters commemorating the burial of JFK at Arlington National Cemetery. Jean and Bob always felt a special attachment to our 35th President.

Their sons were each born within days of Bob’s two yearlong deployments to Vietnam adding to the, sometimes, lonely burdens of an Army wife. With 20 moves in as many years, she never complained and always provided tireless support to Bob’s challenging assignments while actively participating in the many activities of the wives’ groups. Bob was always proud of Jean’s special leadership in organizing and raising the morale of the wives of the battalion that he was so proud to have commanded.

When Bob retired from the Army in 1980, they settled in Pleasanton, CA and Jean returned to working in the community. She soon renewed her love for volunteering and became active as a Charter Member of the Assistance League of Amador Valley (ALAV). She went on to hold each of the senior ALAV leadership positions with the exception of president; always preferring to serve in a support role.

Jean is survived by her husband of 58 years, Bob, her two sons and their wives, Bobby (Laura) and Brad (Vanessa) and four grandchildren of whom she was intensely proud, Meghan, Cameron, Annika and, the youngest, Ruby Charlotte, age two. Sadly, Jean passed away three months before the scheduled arrival of her fifth grandchild who will be Ruby’s little sister. She is survived by her sister, Sandy (Art), nephew Bill, and niece, Sherry. Her cousin Kerry (Bob) and their children Brenna and Ross also shared special places in her heart.

Jean will be cremated and buried with Bob, who will receive Full Military Honors, at Arlington National Cemetery at a future date to be determined.

In lieu of flowers, please consider a donation to the American Cancer Society or the Assistance League of Amador Valley (ALAV).