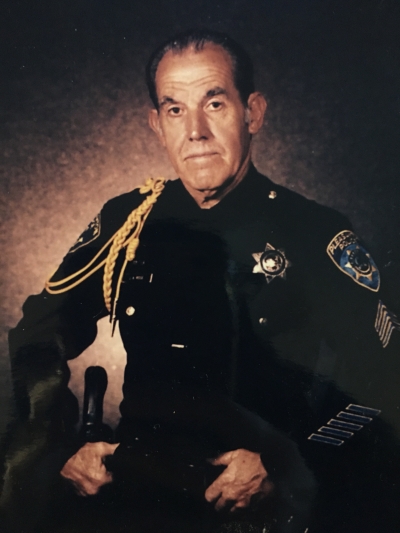 Joseph Anthony Rose passed away on Monday, April 30, 2018. He touched many lives with his outgoing personality and lovable spirit.

Joe was born in Hayward, CA. After high school, Joe joined the United States Army and served during WWII. He later joined the United States Navy and served during the Korean War. Once he returned home, he moved to Pleasanton in 1956 and became a police officer with the city. Joe served the city of Pleasanton for 29 years and retired as a sergeant in 1985. After he retired, he enjoyed teaching traffic school, as well as working on his 1955 Chevy pick-up truck.

Joe was predeceased by his loving wife, Millie Rose and is survived by his children Joseph Rose II (Donna Rose) of Pleasanton, Luanne Rose (Bob Kitson) of Pleasanton and Frank Rose of Stockton, as well as his grandchildren Mirissa Rose and Millie Sansom of Pleasanton. His laughter and generosity will be missed by all who knew him.

Photo Gallery
0 photos Upload a photo
Remembrances
1 entry Submit a remembrance
From Lynn Davidian
May 7, 2018
Joe taught a mandatory class I had to take for a speeding ticket. He made that day fun and informative! I've taken those classes before (!) but never was it such a productive experience. I enjoyed all his personal stories and upbeat attitude. I had ...
Read more
Memorial service
Friends and family are invited to a vigil on Monday, May 7, 2018 from 5:00-8:00 p.m. at Graham-Hitch Mortuary, 4167 1st St, Pleasanton. The funeral mass will be held on Tuesday, May 8, 2018 at 10:30 a.m. at St. Augustine Catholic Church, 3999 Bernal Ave, Pleasanton. Burial to follow at St. Augustine Cemetery. Immediately following the burial, the reception will be held at St. Augustine Catholic Church.
Make a donation
In lieu of flowers, contributions may be made to the Pleasanton Police Officers Association in Joe’s name.
About this site     Contact us