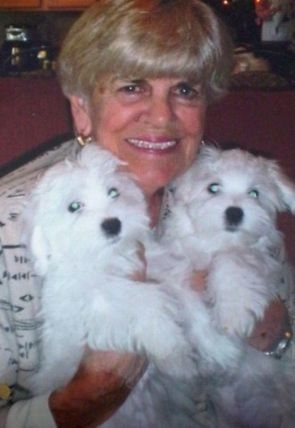 Lael Arie Moffitt passed away November 16 2016 in Woodstock Georgia at the age of 83 surrounded by her loving family. Lee was born on June 23, 1933 in Eureka California and graduated from Eureka High School in 1951. She move to San Lorenzo California where she worked at Clayworth Drugs, there she met the love of her life, William Lyle Moffitt. Together, they owned six successful pharmacies in the East San Francisco Bay Area. Lee was an avid golfer and member of the Castlewood Country Club and successful real estate agent with Alain Pinel in Pleasanton California. Retiring in June 2005, Lee moved to Canton Georgia to live near family. She will always be remembered as a stylish and classy lady. Lee is survived by her four children and their spouses, Ned and Deborah Yost of Georgia, Danny and Linda Yost of Grass Valley, Karen and Bill Lehto of Canton Georgia, and William and Nicole Moffitt of Half Moon Bay. Lee was blessed with 15 grandchildren, Ned, Josh, Jenny and Andrew Yost, Ryan, Matthew, and Nicky Yost, Katie and Emma Lehto, Michael Frazier, and Lily, Chloe, William, Gracie and Audrey Moffitt. One great grandchild Jordan. She is also survived by her sister Janet Clair Bird. Lee was preceded in death by her husband of 40-years, William Moffitt, and her loving sister Sue Lynn Tonini and her parents Auda and Leslie Hammock.

Photo Gallery
0 photos Upload a photo
Remembrances
0 entries Submit a remembrance
Memorial service
Lee’s funeral will be held at Sanders Funeral Home in Eureka California on the 29th November at 10am.
Make a donation
In Lieu of flowers, a memorial contribution may be made to The American Lung Association PO Box 7000 Albert Lea, MN 56007-8001
About this site     Contact us