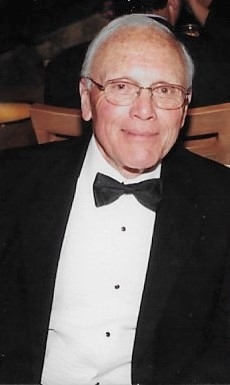 Leonard G. Mark, a 60-year resident of Pleasanton, California passed away in his home surrounded by his family at age 87 on June 19th. He was born in Selma, Ca to Glenn and Edith Mark. In 1952, Leonard enlisted in the Air Force and during the Korean War he piloted one of the first military jets as a member of the 310th Fighter Bomber Squadron. Returning from Korea, he attended Fresno State and graduated with a Bachelor’s degree in Business Management and a minor in Art. In 1957 he met and married Martha Scott of Fowler, Ca. They lived in Oakland shortly before putting down roots in Pleasanton where they raised their three children; Kelly, Darin and Jennifer. Leonard worked at the Lawrence Livermore National Laboratory in Business Operations for 33 years. He was very active in the community and the Presbyterian Church where he was the substitute organist and enjoyed being part of the church choir, as well as being one of the original members of the Balloon Platoon. He would often lend his artistic abilities and creativity towards town events. After retiring, he started a framing business, walls, et cetera. Leonard always took the time to listen to others and truly cared about the events in his family members’ lives. He had a way of making each of us feel special. The love and compassion in his heart was given freely. All those who met him knew they were in the presence of a calming, kind, and extraordinary person. Leonard will be deeply missed. He is survived by his wife, three children, eight grandchildren, and six great-grandchildren. A service will be held on July 22nd at the Veteran's Memorial Building on 301 Main Street at 2:00 P.M. In lieu of flowers, the family has requested that a donation be made to the Wounded Warrior Project.