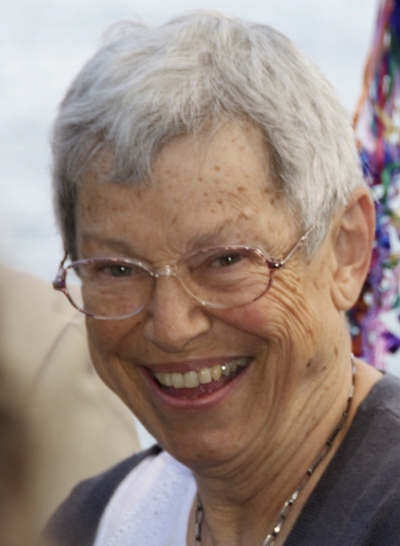 Marcia was born February 18, 1929 in Seattle, Washington to Norman E. and Ruth Hunter Churchill. She died peacefully on October 7, 2012 in her Indianola, WA home. Marcia lived a life of purpose and integrity; printed words barely scratch the surface of legacy of compassion and love she leaves to her friends and family. She will be greatly missed by all who knew her. Marcia was a loving wife and mother, a true friend and doting grandmother whose optimistic character shined through in all she said and did. To Marcia?s family, she found happiness in sharing meals together, embarking on weekend trips of adventure with her grandchildren, and random moments of silliness and good laughs. To her friends, both far and near, Marcia was a genuine companion with a listening ear to all. Marcia grew up in Sunnydale and Seattle, WA, attending Highline High School and graduating from Seattle?s Lincoln High School as a member of the class of 1947. The following fall, she entered the University of Washington (U.W.) where she pledged as a member of the Alpha Delta Pi Sorority. Marcia lived in her sorority house during her enrollment at the U.W. and enjoyed many moments of laughter, fun, and etiquette lessons with her sorority ?sisters.? In 1950, Marcia graduated from the University with a degree in Elementary Education, ready to change the lives of Seattle?s youngsters. By the fall of 1951, Marcia has accepted her first teaching position as a first grade teacher; little did she know she would have to share all her lunches with six year-olds and keep neighbors? dogs out of her classroom. During her college years, Marcia met her husband, Dr. Ronald D. Haug. On June 14, 1952 they were married at Highline?s Florence Henry Memorial Chapel in Seattle. They made their first home in Port Angeles, WA, where Marcia?s talent for hostessing and catering fabulous parties became evident. Their eldest daughter, Sally was born in Port Angeles. In 1959, Marcia and Ron moved back to Seattle where Ron received his Orthodontics degree from the U of W, their second daughter, Jane, was born, and Marcia taught primary school in Alderwood Manor. In May of 1960, Marcia and Ron moved to Pleasanton, CA with two daughters Sally and Jane, driving all the way, in a stuffed-to-the-brim Volkswagen Beetle and live turtle dangling from its ceiling. They lived in Pleasanton for 35 years where Marcia and Ron made many lifelong friends. She was active in the Children?s Hospital Guild of Oakland, CA, a tennis member of the Castlewood Country Club, and later, worked as an office assistant in Ron?s orthodontics office. Upon Ron?s retirement from his orthodontics practice, Marcia and Ron permanently moved to the family home in Indianola, WA where Marcia volunteered her time as the North Kitsap Arts and Crafts Festival president, perfected her jigsaw puzzling skills, and enjoyed many summertime memories with her family on the shores of the Indianola Beach. They celebrated their 60th wedding anniversary this past June. Her memory and spirit lives on in our hearts; we are all better people for having known such a remarkable woman. Marcia is preceded in death by her parents and husband. She is survived by: sister, Ruth E. Churchill of Tiburon; daughters, Sally (Gary) Haug Walker of Livermore, CA and Jane (Mark) Haug Brown of Tucson, AZ, sisters-in-law, Elloise Halverson Haug of Seattle; nephews, Steve (Joy) Jarvis of Bothell, WA, Jeff Jarvis of Seattle, WA, Chase (Kate) Jarvis of Seattle, WA, and Scott Haug of WA; nieces, Diane and Robin Haug of WA; grandchildren, Adrianne (Joey) Haynes D?Amico, Veronica (Jerico) Haynes Castillo, Callan Haug-Walker, Zoe Haug-Walker, and Aaron Brown and great-grandchildren Caitlynn Castillo and Ruby D?Amico.

Photo Gallery
0 photos Upload a photo
Remembrances
1 entry Submit a remembrance
From sergi constance
April 17, 2018
You can easily to clear all saved browser history,so friends you entire all search history are saved you chrome and browser delete browsing history so we have learn how can remove search history,try thi...
Read more
Video
Upload a video

Memorial service
At Marcia?s request, there will be no services. Remembrances in her name can be made to: Indianola Beach Improvement Club PO Box 212 Indianola, WA 98342 or Children?s Hospital Research Foundation (Oakland, CA) at www.chofoundation.org. Arrangements entrusted to The Stone Chapel Poulsbo Mortuary. An online memorial can be seen at www.poulsbomortuary.com.
About this site     Contact us