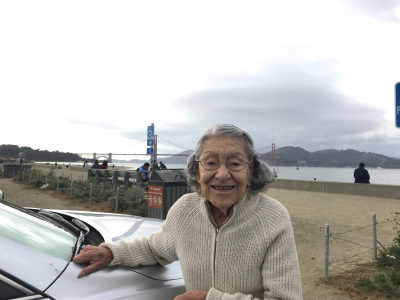 Mary was a loving mother and grandmother, who passed away peacefully at 91.

Born in La Paz, Bolivia to Jose Calderon and Maria Villegas Calderon, Mary was the youngest girl of 5 children and the only one in her generation who received a university education in the US.

After returning to Bolivia, she worked in various government agencies and US institutions such as the Peace Corps and USAID. Mary met her future husband, Oscar, while he was working in Bolivia. They called each other "Vida" which means "life" in Spanish. They did not get married until 1965, after she had moved to southern California a few years earlier. They had their only child, Joe, in August 1966.

In 1968, the family moved to Beirut, Lebanon and lived there for 15 years. It was the "Paris of the Middle East" and Mary loved the Mediterranean lifestyle and multi-cultural people. During this time, Mary focused on raising her child far away from family, and frequently evacuating due to the ongoing civil war that started in 1975.

Once their son graduated from high school in 1983, the family decided to move back to the US and settled in Santa Barbara, CA because it reminded them so much of Beirut. Mary made many new friends and worked in various roles while also becoming a licensed tax preparer. Oscar passed away in 1995, and Mary retired by moving to Pleasanton in 1997 to await the birth of her third grandchild.

In Pleasanton, she continued helping others with income tax filing and volunteering in many senior citizen communities such as Ridgeview Commons. But mostly, she attended every event her grandchildren celebrated. Mary had a passion for helping others. She was on every charity's mailing list and volunteered her time whenever she was asked.

Mary is survived by her son Joe, daughter-in-law Ginny, and grandchildren Dasha, Alex, and Ben.

Photo Gallery
0 photos Upload a photo
Remembrances
0 entries Submit a remembrance
Memorial service
A memorial service will be held in the near future to allow family and friends to travel more easily after the holidays
Make a donation
Memorial donations may be made to Hope Hospice.
About this site     Contact us