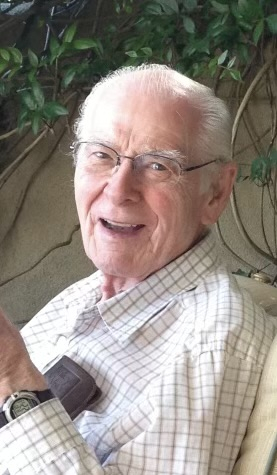 Maurice August Ghysels died peacefully on December 29,2021 holding the hands of his children, Ivonne and Maurice, in Pleasanton, CA. He was born on Feb 13, 1929 in Racine, WI, to Cyrille and Ivonne Ghysels, who were immigrants from Ghent, Belgium.

Maurice’s father died when he was three years old leaving his mother to provide for him and his older brother, Albert. She had very little knowledge of the English language and had to find work relying on her neighbors to help raise her boys. Maurice endured many hardships as a child and as a result was basically on his own. He was a butcher until he was 17 years old, at which time he joined the Navy. He was stationed on the USS FDR aircraft carrier from 1946-48. He sailed the Caribbean and Mediterranean and loaded ordinance in 5 inch cannons. He loved the Navy. It was the first time he had a stable life. He was honorably discharged and attended airplane mechanics school in CA graduating top of his class. Upon graduation he was offered a position in FL, but decided to stay in CA.

His mother married Santo “Sam” Sturino. They lived in Van Nuys, CA. Sam had a large Italian family in Kenosha, WI. After his military discharge, Maurice joined them on a visit to Kenosha where he met the love of his life, Sam’s niece, Carmella Trotta. Maurice stayed in WI a short time until he decided to help Sam in his painting and decorating business in CA. Carmella moved to CA where they were married in 1949. Their daughter, Ivonne, was born in 1950, and son Maurice Cyrille in 1956. He was so proud of his children throughout their lives. His family brought him great joy.

In 1970, Maurice moved to Pleasanton, CA, and worked with his brother, Al, in his cabinet shop. In the early 1980s he started working at LLNL and retired in 1992 to care for his ailing wife. They were happily married until Carmella’s death in 1994. In 1995, Maurice met Adele Waldman who was his companion and love until her death in 2017.

Maurice was first and foremost a family man. He was always on the go helping everyone with projects. He could fix and build anything like a pro. He was fun-loving, funny, kind, friendly, always happy with a positive attitude, and had a kind word for everyone. He focused on the good. He was patient and a wonderful caregiver. Because of the hardships of his childhood, he was very frugal, yet very loving. Maurice enjoyed being on the go whether he was doing a build-it project, perusing the aisles of any store, taking day trips, or traveling and exploring the world with Carmella and Adele.

Maurice was the patriarch of a large loving family, he is survived by his daughter Ivonne Witt and her husband Michael; his son Maurice C. Ghysels, EdD and his wife, Carmen; grandchildren Marcella Witt Rampoldi (Dean); Melissa Witt (Mark Grace); Aja Lodigiani (Stephen); and Michael Ghysels; great-grandchildren, Anna and Emma Rampoldi; and Mateo and Giulia Lodigiani; along with many beloved nieces, nephews and extended family. Maurice will be greatly missed by his family, friends and his caregivers at The Parkview in Pleasanton. He was preceded in death by his wife, Carmella; companion Adele Waldman; and brother, Albert.

A private burial was held. There will be a Celebration of Life on June 4, 2022. Please contact the family by May 28 for details. Maurice was loved and will be missed by all who knew him.