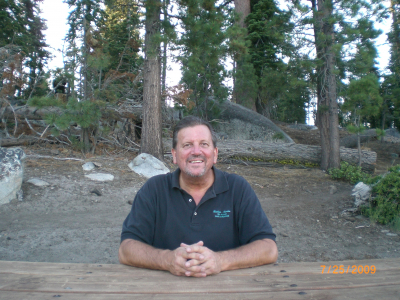 To know Mike Hill is to walk into his garage filled with life size John Wayne cutouts and posters, Jack Daniels memorabilia, We Support Our Troops and American flags, Calco swag, wedding and family photos, an antenna made from a Coors bottle and duct tape for his old school stereo, an extremely organized workbench, and a framed cross stitch that says, “Love is what makes a home”. Mike was the second child born to Jim and Genene Hill in Colorado Springs, CO but moved to CA before he was a year old where he spent the remainder of his life…although he loved to claim his birthplace of CO in order to be different from his siblings and cousins. Mike showed his athletic prowess throughout his youth playing baseball, basketball and football; and equally impressive was his expertise in both ping pong and bumper pool. When the family moved to Okinawa, Japan in the early 1970’s Mike continued to pursue all three sports, even serving as the captain of the 9th grade basketball team that went on to win an island championship. Back in the U.S. for the remainder of high school, Mike found his real passion was basketball and played for the Dons at Amador Valley High School where he led teams to league championships both his junior and senior years. Mike then continued running the hardcourts with the Wildcats at Chico State University. And during all those years of organized sports, Mike certainly enjoyed quite a few rounds of golf, always with something to sip in the golf bag and a competitive betting game to make things interesting. While at Chico Mike took the exploratory approach toward college, changing his major three times, maybe four, and finally graduated with a BS in Construction Management.

An even more important event during his Chico days was MIke’s meeting/reconnecting with Roxanne (Pope), who became his bride of 41 years. Mike and Roxanne graduated from Amador together in 1976 and knew of each other, but ran in different circles in high school. Roxanne had moved to Chico with her family to farm almonds and after a chance meeting, Mike and Roxanne fell in love and married in 1981. The birth of their two children, Matt and Jessica, followed and the Hill family was complete. After living in the city of Tracy for eight years, the family moved out to the Tracy countryside and established Diamond Hills Ranch for the young family to put down roots. The Ranch eventually became a gathering place for the expanded family which came to include four granddaughters who just loved to play with Grandpa. Grandpa Mike indulged his granddaughters with all the toys of a ranch: quads and motorbikes, as well as nerf and water guns which always instigated the rambunctious play that Mike was so great at. Mike co-founded Calco Fence with his brothers-in-law, Scott and Kirk Pope in 1983, initially producing gates out of their garages in Pleasant Hill and later locating the company in Livermore. With a head for numbers, a strong sense of integrity, grit and a work ethic that never stopped, Mike was a leader for the company as it grew successful beyond their wildest dreams. He rose at 3:00 each morning to be the first one at the office; there, he sent the crews out to their job sites, always with the reminder to be safe and the call to be proud. He helped load the trucks, using the physical strength that so defined him. And, regardless of what the day brought, MIke always had time to listen, provide advice and give direction to those who needed it. It was through actions like this that Mike created a team feeling where everyone knew they belonged and were able to contribute in a significant way.

Mike was larger than life. Everyone has said so. He was the life of the party. You always knew when Mike walked in the room, not because he made a lot of noise but because of his sense of confidence, his stature and his ability to draw people in. He could fix anything as long as he had a roll of duct tape; a skill learned from his father and that Mike proudly passed on to his son.

Mike was kind and generous, especially with his time, strength and energy. He would cook an extra “Picking Turkey” at Thanksgiving so there was plenty of crispy skin for everyone to nosh on while he carved the real one. He would drop by his mom’s house to help any way he could. In fact, not too long ago, and to her surprise, she came home to a backyard patio framed by market lights that he had hung for her as a gift.

You could count on Mike to be there whenever he was needed and, you could most certainly count on him to bring tools, even a tractor, if necessary. Of course, no matter what he always brought his muscle, a cooler full of beer, a genuine laugh and raucous fun.

Mike is survived by his wife, Roxanne, son, Matt, daughter, Jessica, mother Genene, brother, Steve, sister, Carolyn, four granddaughters, Isabella, Ava, Evelyn, Charlotte, a loving extended family and a truckload of friends. He is predeceased by his grandmother, Juaneva and his father, Jim.

Photo Gallery
0 photos Upload a photo
Remembrances
0 entries Submit a remembrance
Memorial service
Please join us at a gathering to celebrate Mike’s life September 17th, 10am-2pm at Tracy’s Nursery and Gardens in Tracy, CA. A short formal program will be held at 11am followed by a BBQ and the raising of glasses to Mike.
Make a donation
In lieu of flowers, please consider making a donation to Mike’s chosen charities, Tunnel to Towers Foundation or St. Jude’s or an organization of your choice.
About this site     Contact us