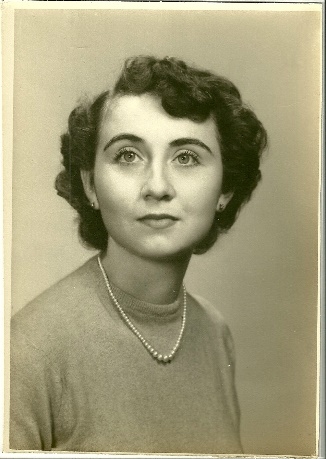 Muriel Marion (DeMoussett) Spoerlein, age 80, of Vacaville died quietly on Sunday, Aug. 30, 2015, around the time she would normally attend mass at Brookdale Vacaville Leisure Town (formerly Merrill Gardens) where she called home. She had suffered a major stroke a few days earlier which led to her death.

She was a devoted Catholic and cemented in her faith. She was baptized in her grandparents' church at St. Patrick's in Oakland in 1935 and celebrated her first communion at St. Isidore on May 27, 1945. She was confirmed "Mary" at her Confirmation also at St. Isidore on Nov. 26, 1949.

She met the love of her life while working as a soda jerk at the Dutch Oven in Danville, California. After making sure she had his coffee ready before he walked in the door, Muriel won the heart of Ross Spoerlein and married on Feb. 11, 1954, in Stockton, California. They remained loving sweethearts for 49 years until his death in 2003. Although they never had human children of their own, they had their four-legged furry family of dogs who they lovingly shared their home with over the years beginning with Lady, Samantha, Minnie, Midge, Molly and Bon-Bon. They enjoyed many vacations in the mountains with their camper and their dogs.

Muriel was a devoted employee having worked many long years at the Daniel's Pharmacy on Hartz Avenue in Danville, CA until it closed, and later gave 27 years of service to the San Damiano Retreat of Danville.

In July of 2010 Muriel was honored as the longest standing Parishioner of St. Isidore, having been a member for 67 continuous years. She was so proud and shared with all she could this amazing fact.

Muriel was a loving caregiver to her sister, father, mother and husband during their end of life journeys. Now it is time for our little caregiver here on earth to accept the care of her heavenly Father.

Photo Gallery
0 photos Upload a photo
Remembrances
1 entry Submit a remembrance
From Alyssia Spoerlein
Oct. 21, 2015
I was thinking about you this week. I'm sorry we never made it up as often as we should have. I'll always remember you. You were so sweet and loving. I hope you're dancing with the Angels. Love you Aunt Muriel.
Memorial service
A Rosary will be held in the Activity Room at Brookdale Vacaville Leisure Town on Thursday, Oct. 22, 2015, at 10:30 a.m. Pet Therapy dogs are welcome. A Funeral Mass will be held at St. Isidore Church in Danville on Oct. 23, 2015, at 10:30 a.m. A private burial will be held at a later date for family only where she will be laid to rest with her sweetheart, Ross.
About this site     Contact us