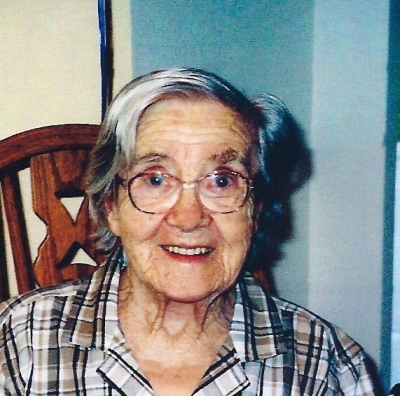 Olga Busslinger left her earthly life on July 20, 2014, after nearly 100 years charming everyone she met. She was born in Mellingen, Switzerland on August 13, 1914, the youngest of 10 children.

Olga came to the United States after World War II, having spent the war years in England. She worked as a domestic for many wealthy families throughout the United States in Chicago, New York, Florida and California. Her favorite part of her adopted country was Santa Barbara, where she spent many years before retiring and moving to Tracy, California to care for her older sister.

In recent years Olga lived at Eden Villa in Pleasanton, where she endeared herself to all who resided and worked there. Although Olga never married, she leaves behind many nieces and nephews in Switzerland and France, along with many friends in Tracy and Pleasanton who adopted her, thus becoming her family. Anyone who knew her will always remember her bright eyes, constant, enormous smile, and ever present positive outlook. Her deep faith and convictions were the main constant in her life, along with her compassion for everyone. She never missed an opportunity to appreciate a flower, a new tree bud, or a bird in flight.

Olga found her joys in simple ways, loving deeply all animals, especially cats. She gave freely and often to many charities, with a soft spot for those less fortunate than herself.

Her "American Family" Janice and Doug Miller, Ashley and Keith Savageau, Reagan and Simon Maher, and Jared Miller wish to thank the caregivers at Eden Villa who loved and lived with her for the past 10 years, and took such good care of her. As they always are, Hope Hospice was wonderful and their angel Jose was God's final gift to her.

A Mass of Christian Burial will be celebrated at 11 a.m. on Thursday, July 24, 2014, at St. Bernard?s Catholic Church, 163 W. Eaton Ave., Tracy. Visitation will be observed Wednesday from 5-7 p.m. followed by a Vigil Service at Hotchkiss Mortuary, 5 W. Highland Ave., Tracy. Burial will be in Tracy Public Cemetery, 501 E. Schulte Road, Tracy.