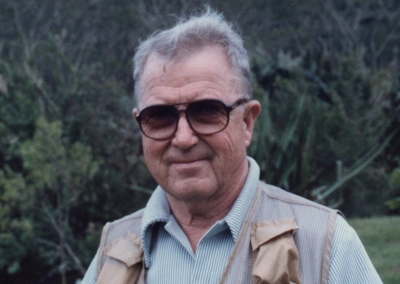 Dr. Raymond “Buck” Young, an innovative veterinarian at the Oakland Zoo who later served Pleasanton pets and their owners for 20 years in private practice, died October 5, 2019 at the age of 95. He was married 72 years to the love of his life, Willa.

Ray had an incredible life. Second Lieutenant Young served in the Army Air Forces during World War II as a flight engineer and navigator from 1942 to 1945, flying in B-29 Superfortress airplanes mapping the Japanese coastline. After his discharge, he attended Oklahoma State University in Stillwater, and married Willa Lurleen Lutner, on May 29, 1947. He graduated from the School of Veterinary Medicine at OSU in 1952. He was born on a diary farm in Hollis, OK.

Ray did large and small animal veterinary work in Oklahoma, Texas, and Louisiana before moving out to California in 1960 to become the zoo director and veterinarian of the Oakland Zoo, located in Knowland Park. As director Ray oversaw the building of the first exhibits at the zoo that included exotic animals from Africa and Asia. As part of his job as zoo veterinarian, he had to develop ways to treat exotic animals such as lions and tigers without getting hurt or hurting them in the process. Ray’s “squeeze cage” design for handling big exotic cats without endangering them or their handlers was one of the first of its kind. It was adopted by several other zoos nationwide.

Ever the innovator, Ray developed a course of treatment for Canine Parvovirus, a highly contagious disease with a 90% mortality rate when it was first discovered in 1978, long before a vaccine was developed. Using aloe vera gel from plants grown in his backyard and other natural ingredients, Ray was able to save the lives of many dogs that would have died without his intervention.

Ray was always busy, whether it was working, exercising, or fishing. Ray was an avid fisherman, taking his family on numerous trips to Montana, Nevada, Wyoming, Oregon and New Zealand to catch fish. His favorite was trout, but he’d take whatever was biting. The general rule for fishing with Raymond was to never let him eat more than a candy bar for lunch, or you’d never make it home for dinner if the fish were still biting.

Raymond was a devoted husband and father. He leaves behind his wife of 72 years, Willa Lutner Young of Pleasanton, his daughter Patricia Young Toombs (Larry Toombs) of Gilroy, granddaughter Erin Melissa Toombs of Atlanta, and his sister Mildred Hicks of Montrose CO.