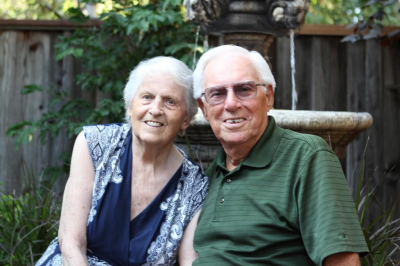 Richard Anthony Cousins, a long time Pleasanton resident passed away November 9, 2021 at the age of 95.

Richard was born in San Jose CA to Anthony Garchitti and Genevieve Cousins. At the age of 5 he was adopted along with his brother Robert by his grandfather Guy and Grandmother Edna Cousins and raised by them. He attended Herbert Hoover Jr. High School and Bellermine Prep until he joined the Marines at the age of 17. He served in WWII and the Korean War.

Richard worked in the dairy industry starting as a milkman for Golden State Farm’s and worked his way up to management until his retirement from Knudsen.

Richard then owned and operated Gourmet Works in Los Altos along with his family until his second retirement. Richard and Santa moved to Pleasanton where they lived until his death.

His #1 passion (next to mom) was playing golf. His nickname ACES came about because he hit 4 holes in one during his golf career. He was a Marshall at Callippe golf for 16 years and golfed until he was 93.

Richard aka “Big R” had a huge personality and will be missed by many. He is survived by his wife Santa Cousins his 4 children, Steven Cousins (Cynthia), Bruce Cousins (Susan), Kathy Starkey (Gary) and Craig Cousins (Aggie) his 6 grandchildren and 3 great grandchildren.

A mass will be held on Monday, November 22, 10 am at St Augustines in Pleasanton, reception immediately following.