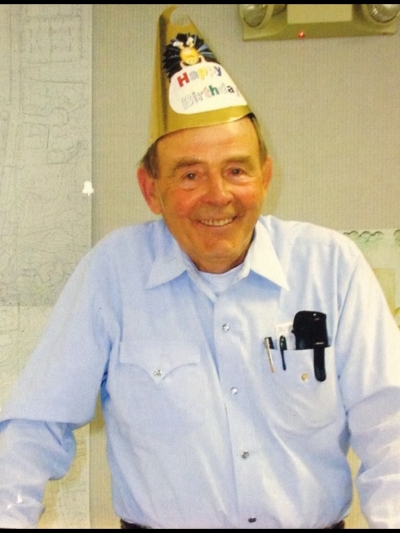 After a brief illness and in the company of loved ones, former Danville Mayor Richard Waldo passed peacefully from this world on December 14, 2016.

Dick Waldo was born in Minot, North Dakota on April 13, 1925. His mother said that he “came out of the womb smiling.” Dick loved life and lived his with great passion, enthusiasm, and kindness. He was raised by his parents in Bismarck and lived there until he joined the Navy in 1943. He was a corpsman (pharmacist mate) and was stationed at the Treasure Island Naval Hospital. After the war, Waldo attended Stanford University and graduated with a BA in history in 1948. Waldo would remain a steadfast fan of the Stanford Cardinal his whole life.

In 1948, Waldo began a successful 35 year career with the Bell System. He held a variety of posts during his career in Fresno, Reno, and San Francisco. Waldo was working in the Coin Division of Pacific Bell when he retired in 1983.

Waldo loved nature and was an avid outdoorsman, scout master, fisherman, bird watcher, and conservationist. He enjoyed camping in the back country, spending time in the High Sierras, and traversing the vast expanses of the American West. Waldo was a passionate environmentalist and was involved in a variety of environmental causes and organizations.

In midlife, Waldo took up running and it became a life passion. He organized lunch time running groups in San Francisco, offering advice and encouragement to new runners. Waldo ran more than 300 races including 44 marathons, and 8 ultra-marathons. He was especially proud that he ran the Boston, Chicago, Avenue of the Giants and Pikes Peak marathons. Waldo also ran around Lake Tahoe (72 miles) twice.

Richard Waldo loved the power of both the spoken and written word and history (especially of the American West and Civil War). He was active with the Friends of the Danville Library and served as a trustee of the San Ramon Valley Historical Society. Like his father, Waldo was an active Kiwanian. He loved the comradery of Kiwanis and was proud to have been chosen the San Ramon Valley Kiwanian of the Year in 2012/13.

In one of the highlights of his life, Waldo was elected to the Danville Town Council in 1993. Waldo served on the council for two terms (1993-2002) and was Danville’s mayor in 1998 and 2002. Waldo was an enthusiastic civic booster and deeply loved his adopted home town and its people. Being mayor was the highlight of his career, he called it the “best job I ever had”. He enjoyed listening to constituent concerns at the farmers market, working with the town’s staff, and sought in ways both big and small to improve the quality of life for Danville’s residents.

Dick Waldo, an eternal optimist (“I have never really had a bad day in my life”), was a strong believer in the essential wisdom of the Golden Rule and sought to treat others as he hoped to be treated. He was a charmer and gifted raconteur who thrived on telling stories and making people smile.

In his later years, he took special pleasure in holding court and visiting with friends at Bagel St. Cage. Waldo loved dogs, traveling, ice cream, movies, music, and popcorn; but his biggest love of all was his love of life.

Waldo was a loving and kind husband, father, grandfather, and a friend to all. He is survived by the love of his life, his wife Kathy, by his devoted children Robert and Wendy, by six loving grandchildren: Adam, Amanda, Hilary, Lloyd, Rebecca, and Scott; and by seven great-grandchildren. He was preceded in death by his parents Frank Harwood Waldo and Edna Lamoore Waldo; by his sister Mary, and by his son Steven.

A memorial service will be held Saturday January 7, 2017 at 1 PM at the Danville Community Center, 420 Front St.