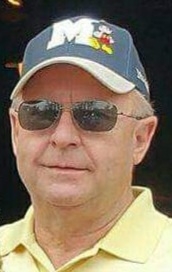 Robert (Bob) James McKim died peacefully on Wednesday, October 28th, surrounded by his loving family after a hard fought battle with Liver Cancer. Bob died knowing that he was loved and respected by his family, friends and colleagues.

Bob married his best friend and the love of his life, Cathy Maureen (Pope) McKim in December, 1976 and they would have celebrated 44 years of marriage this year.

Bob was born in Youngstown, Ohio and was proceeded in death by his beloved parents, Robert & Lois (Gould) McKim; his father and mother-in-law Laroye Edward and Geraldine Lee (Roberts) Pope and his sister-in law Lynne Anne (Pope) Hopper.

Bob was a proud Vietnam Veteran of the U.S. Navy and a dedicated 30+ year employee of Coca-Cola and Reyes Holdings.

In addition to his family and friends, Bob loved everything Disney, NASCAR and cool cars!

Bob will be laid to rest at the Sacramento Valley National Cemetery in Dixon California on December 3, 2020.

Rest in Peace Bob, we love you; until we meet again.