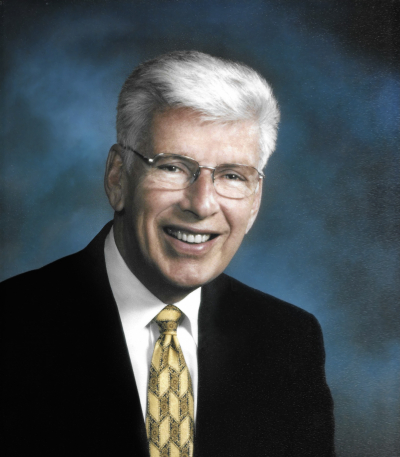 Robert (Bob) Philcox, former Mayor of Pleasanton passed away Saturday at his home in Pleasanton. He passed peacefully, surrounded by his family. Bob was very grateful for the many blessings bestowed upon him during his lifetime. He was also a blessing to those many lives he touched.

Bob was born in Brooklyn, New York on May 25, 1934 to Frederick and Ethel Philcox. He was raised with his brother, Fred Jr. and sister, Rita. Both predeceased him. Bob graduated from Brooklyn Technical High School.

The family moved to Pleasanton in 1954 when his father, a Sergeant in the Air Force was transferred to Camp Parks in Dublin. Bob had worked at two banks in New York so he applied to the Bank of America. The manager did not hire him. That proved to be one of many blessings. Bob then applied at First National Bank of Pleasanton. He was interviewed by the founder and president, Harry Harding. Harry went east on business before making a decision whether to hire Bob. Unbeknownst to Bob, Harry interviewed Bob’s pastor in Brooklyn, who had high praise for the young man. Harry hired Bob as a teller. His starting salary in 1954 was $240 per month, about $11 per business day. Now the blessings continued to mount. Bob was commencing a very successful Community Banking career. Warren Harding succeeded his father as bank president. Warren introduced Bob to the Community Bankers Association of Northern California. Bob was active serving in several positions in that organization, including in 1985, Chairman of Region 6 and President in 1990-92.

While working as a bank teller in 1955, he met a vivacious student, Orley Lutz. She would wait in the bank until Bob was available to cash her paycheck with him. Bank staff could tell when Bob was on the phone with Orley, because he became breathless at the sound of her voice. Bob and Orley married in 1961 and recently celebrated their 61st anniversary. They have two adult children, daughter Nancy and son Bobby Jr (Elyce) and three step-grandsons, Hunter, Chase and Tallon Powell. They also have 3 grandchildren of the heart, Sage and Colt Keck and Mateo Musso.

Bob became Bank Cashier and Executive Vice-President in 1967, member of the Board of Directors in 1968, and in 1990 he was named President, CEO and Chairman of the Board. He was instrumental in the merger with Alameda Bancorp and the eventual sale to US Bank. Bob’s name was synonymous with the bank’s success for 43 years. In 1997-2002 he was Executive VP at Diablo National Bank and in 2003-2007 he was an Organizer and Director of Diablo Valley Bank. Bob was a highly regarded community leader. He was often the Master of Ceremonies, well known and respected for his easy speaking manner and incredibly witty sense of humor.

Bob was proud of his service in the United States Army and Reserves in the 3rd Infantry Division as a ballistic meteorologist 1957-1963.

Bob had a wonderful, successful life of service to his country and the City of Pleasanton. Well done, Bob, a good and faithful husband, father and friend.

Photo Gallery
0 photos Upload a photo
Remembrances
0 entries Submit a remembrance
Memorial service
Friends and family are invited to a Celebration of Life on Tuesday, October 4, 2022 at 2:00 p.m. at First Presbyterian Church of Livermore.
Make a donation
In lieu of flowers, donations may be made to First Presbyterian Church of Livermore or Hope Hospice.
About this site     Contact us