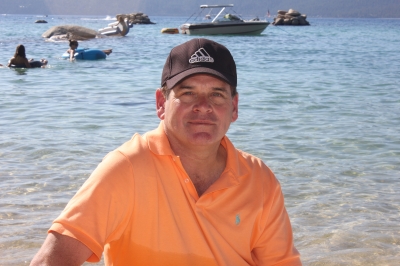 Scott Louis Di Santo of Pleasanton, California, passed away after a long battle with Multiple Sclerosis.

He was born in San Mateo, California, and attended school at St. Matthew's Catholic, Serra High, and the University of Nevada, Reno. He was employed at Lexus of Concord.

Scott was preceded in death by his parents Louis and Patricia Di Santo and brother Michael Di Santo. He is survived by brother Martin Di Santo(Cyndi), sisters Lauren Ginocchio( Gary ), and Julie Zanoni(Chris), 13 nieces and nephews and a grandnephew.

Among Scott's many interests, he had a particular passion for photography, cars, fishing, skiing, biking and boating. He was a gifted golfer, which he started playing at age 10 and continued playing for his high school and college teams. He treasured his vacations in Tahoe with family and friends.

Scott will be remembered for his charming, compassionate and humorous quick wit. He had a smile that lit up the room!

Memorial service
His wonderful spirit, joy, and humor will be celebrated at 11 a.m. on Saturday, June 6 at St. Gregory's Church, 2715 Hacienda St., San Mateo, CA
Make a donation
In lieu of flowers the Family asks that you consider a donation to: MS Society In memory of Scott Di Santo 1700 Owens St., Suite #190 San Francisco, CA 94158 http://www.nationalmssociety.org/Chapters/CAN/Donate/Give-in-Honor-or-Memory
About this site     Contact us