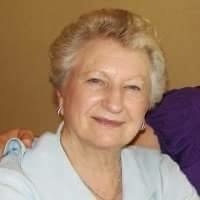 Shirley Nadine (McAdam) Wilson, a woman who lived life to its fullest, died November 4, 2016 in Pleasanton at the age of 90.

When asked about her attitude while in hospice care, she responded she had a great life.

In her last year, she organized a family reunion at Easter and then brought her family together for a fabulous dinner to celebrate her 90th birthday in September.

Shirley was born and grew up in Oakland, the daughter of David King McAdam and Virgie Bernie Vernon. She sang with her father in live performances and on the radio, sparking a love of music. She graduated from Fremont High School. She was working in a dental office in Oakland when she met De Witt Wilson after he returned from World War II. They were married 62 ½ years and loved to sing to each other—their favorite song was "You are my sunshine." They moved to Pleasanton in 1966. While two of her sons were away at college, she joined with her daughter, Karen, to cook meals in large pots and then sealed them and sent them off to the boys at college. That's well before Zip-lock bags or vacuum sealing had been invented.

The construction company they owned, Costanzo and Wilson, donated what is now "Century House" and the surrounding land to the city of Pleasanton as part of their development plan for the adjacent acreage. Shirley loved animals and volunteered for the Valley Humane Society. She took in stray cats as well as feeding birds, squirrels and hummingbirds. Two Labrador Retrievers visited her the day before she passed. She also took her koi from her long-time home on Foothill Road to Stoneridge Creek when she moved there a few years ago.

For more than a couple of decades, Shirley was an avid fisherwoman. She and Dee owned a fishing boat in Santa Cruz that they used many days to catch salmon. She obtained a commercial fishing license so she could legally catch more fish and then sell many of them to the fishermen's wharf fish dealers and restaurants.

They also owned a jet "sled" boat that they used to tour and catch fish in the lower region of the Rogue River in Oregon, while staying at their favorite Tu Tu & Tun Lodge.

She also loved to garden and to do needlework. She also was passionate about catalogue shopping and was doing that with her granddaughters until the last day of her life. She and Dee loved to travel, particularly with their good friends the Fairfields, the Capillas and the Macchianos. One especially memorable trip with the Fairfields started when they flew to an Eskimo Village in Alaska. Three of them flew deeper into the wild in an amphibious bush plane to a remote river. After the plane landed on the river, Shirley, Ted and Gail waded in the frigid water and caught a variety of very active fish.

Photo Gallery
0 photos Upload a photo
Remembrances
0 entries Submit a remembrance
Memorial service
A reception will be held Wednesday, Nov. 9 at Building Q at the Alameda County Fairgrounds. Interment in the Pleasanton Pioneer Cemetery is private.
Make a donation
The family prefers contributions to the Tri-Valley Humane Society, 3670 Nevada St., Pleasanton, 94566 or Hope Hospice, 6377 Clark Ave., Dublin, CA 94568.
About this site     Contact us