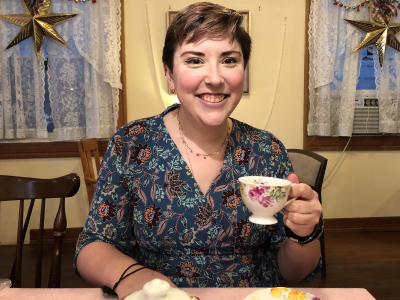 The world lost one of its brightest stars this year. We mourn the loss of our sweet sister, daughter and friend, Stephanie Christine Bell. The youngest of three sisters, Stephanie was born in Fremont, California. Her parents Karla Brown (current Mayor of Pleasanton) and Timothy Belcher and her two older sisters, Pam and Alicia were overjoyed when Stephanie’s arrival completed their family.

A bright young woman throughout her 30-year life, Stephanie was known for her competitive streak and mischievous sense of humor. Her family settled in Pleasanton, where she thrived in her AP classes at Foothill High School and played volleyball as a member of the varsity team. Stephanie graduated with a Bachelor of Science Degree in Mechanical Engineering in 2014 from Cal Poly State University, San Luis Obispo.

Immediately after graduation, Stephanie began to build a successful career at PG&E, in San Ramon, eventually earning a position as a Design and Project Engineer for high pressure gas lines. She enjoyed working and was known as smart, inquisitive, and fun-loving team member. Despite her health struggles, she enjoyed organizing snowboarding trips, chili cook-offs, and decorating her co-worker’s offices on their birthdays. She often entertained others with a good joke or pun. At lunchtime she would share fun and clever games, and it was no surprise to anyone that she usually won.

Life’s simplest pleasures brought the greatest joy to Stephanie. Even after her diagnosis, she continued to challenge herself and became an accomplished snowboarder and developed a passion for the mountains and the great outdoors. She loved cooking and baking and became a master cake artist, decorating beautiful cakes for family and friends. A voracious reader her entire life, she started at an early age reading “Harry Potter” together with her sister Alicia. Despite an 11-year age gap between Stephanie and her eldest sister Pamela, they were very close and shared the love of cooking and family. The love and devotion Stephanie received from her family throughout her life, she would later shower onto all seven of her beloved nieces and nephews, taking great pleasure in loving them, playing with them, and making them laugh.

To know Stephanie was to be inspired by her. Throughout her long four-and-a-half-year battle with breast cancer, she had an incredible sense of bravery and remained positive until her battle ended 30 years after it started, with her mother and two sisters by her side. Even on her most difficult days, it was deeply important to her to continue to spread kindness and make other people’s day brighter. Her beautiful smile never wavered. Stephanie will be greatly missed by her family, friends, and peers, and they hope that you continue to remember her and be inspired by her bravery and her absolute love of life.

Finally, the members of Stephanie’s family Karla Brown, Alicia O’Donnell and Pamela Neher would like to express their heartfelt, and deep appreciation for the care and love she was given by her various healthcare workers throughout her journey.