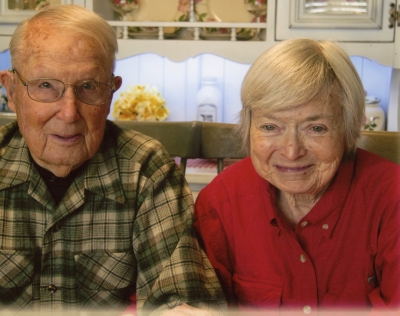 Willa Lurleen Young died January 19, 2020, after an extended battle with congestive heart failure. She had been married 72 years to the love of her life, Raymond, who died in October 2019. Willa was born in Lawton Oklahoma in 1928, the youngest of three children. At a time when many women didn’t graduate from or even attend college, Willa graduated with an undergraduate degree in English and a Masters in Education from Oklahoma State University in Stillwater, OK. in 1951. OSU was where she met and married Ray Young on May 29, 1947.

Willa and Ray were always a team act. When Ray got a job working at the Oakland Zoo as the zoo director and veterinarian, Willa transferred her teaching credentials to California and went to work teaching deaf students in Oakland’s middle and high schools. When Ray left the zoo and opened two veterinary hospitals in Pleasanton, Willa handled the bookkeeping. When they began to acquire rental homes, she got her real estate license in 1987 to handle the day-to-day property management requirements. When they made money to invest in the stock market, Willa joined a local women’s investment group to help identify promising stocks to buy.

Willa was a woman born before her time in many ways. Raised during the depression, she was used to growing her own vegetables and fruit making compost at home so nothing went to waste. While teaching in Oakland in the 60’s, she discovered The Food Mill, a communally-run organic bakery and bulk food store. Mom delighted in the freshly baked whole wheat bread, apricot bars and bulk grain and bran products, all organic at a time when the organic message was considered frivolous. Mom loved the bean and alfalfa sprouts, but decided they were not fresh enough, so she made her own from organic seeds in a Mason jar sealed with cheese cloth. For years after moving to Pleasanton in the early 70’s, she would return to Oakland weekly to buy fresh organic bread, cookies, bulk grains and maple syrup candy. She planted several varieties of plum, peach, apple and citrus trees at their home in Pleasanton, so there would always be fresh fruit.

Willa was an avid thrifter and reader. A perfect day for her started with a cup of coffee, visiting a few select local thrift shops, having lunch with a friend, going to the library to return books and check out some new ones, and then home in time for dinner with Ray. Their favorite restaurant was In-N-Out Burgers, where they met friends for dinner most Friday nights during the last several years of their lives.

Willa was a devoted wife and mother. Her greatest loves were her family and her dog Spoodles. She leaves behind her daughter Patricia Young Toombs (Larry Toombs) of Gilroy CA and grand-daughter Erin Melissa Toombs of Atlanta GA