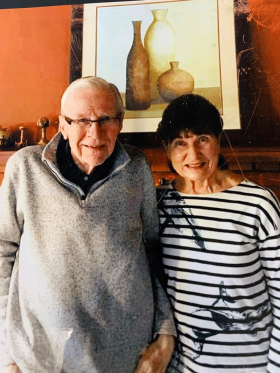 In loving memory of our Father and Mother, Gordon and Audrey Aune. Audrey and Gordon were both born in Portland, Oregon. They both attended college in Oregon were they met. Gordon Aune was born 12/24/1933 and passed Nov. 2, 2021. He preceded his wife of 67 years. Audrey Aune was born July 4 1932 and passed Jan 4 2022. They started their adventure with Gordon in the Air Force. Their time in the Air Force took them to Arizona, Texas, Florida and Alaska. During one of Gordon flights he got lost in Russian Airspace but luckily made it back to Alaska with barely enough fuel. Mean time Audrey worked as a school teacher. They then settled back in Oregon. They were then blessed with the opportunity to adopt twin daughters, Jeanne and Joanne. Three yrs later Audrey gave birth to a son, Mark. Gordons Job took them to Tustin, Calif. where they stayed for 4 yrs. Gordons Job then took them to Pleasanton, Calif. where they lived out the remainder of their life, in the same home for 50 yrs. They are survived by their 3 children, a daughter-in-law, 7 grandchildren and 8 great grandchildren. Audreys sister, Gene, 5 nieces, 4 nephews, which also includes their children and grandchildren. They had a wonderful life and many adventures/travel. Gordon was an amazing woodworker and could build anything. Audrey was well know in the community as a teacher, school counselor during her career for Foothill High School District. Audrey also volunteered at the discovery shop for 26 yrs, and where Gordons skills were often used. Audrey and Gordon Aune were greatly loved and will be sorely missed. May they rest in Peace. WE LOVE YOU !