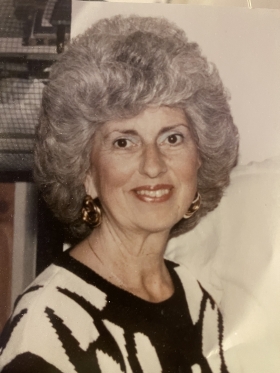 Corrine Mavridis was born to George and Despina Natseos on May 1, 1934 in Astoria, OR. She grew up in the logging camps of Naselle, WA where her parents were cooks for the loggers. Around age 18, her family moved to Portland, OR, where she continued to live until she married in 1961. She passed away in her home on May 3, 2021 after a brief battle with illness. Corrine is survived by her husband of 60 years, Ted, her daughter Melodee (Spencer), granddaughter Kim, and her brother, James Natseos. She is preceded in death by her only son, John.

Along with Ted, they opened Pleasanton Bakery on Main Street in 1966. Corrine worked tirelessly behind the counter daily, chatting with everyone who would come in. When the bakery closed in 1987, Corrine kept herself busy around town, as a property owner and making sure to never miss a meeting of her many clubs she involved herself in. Corrine could always be spotted driving around town with her infamous 1 MAY 34 license plate, during her weekly coffee klatch meetings with her friends from church, or at the racetrack during the Alameda County Fair.

Corrine was a faithful Greek Orthodox Christian, and a longtime member of the Resurrection parish in Castro Valley, CA. Corrine gave many years of devoted service to Resurrection, she was the first woman to be elected to the Parish Council and hold an officer position, worked behind the scenes at the Folk Dance Festival in 1985, when Castro Valley was the host that year. Corrine was always involved in the yearly festivals, working the Yia Yia’s Prika booth, and donating baking supplies annually. Corrine also was very involved in Ladies Philoptochos Society, holding the position of Treasurer several times, and the position of President for eight years, under her beloved Father Photios Dumont.

However, it was Corrine’s role as a Yia Yia, or grandmother, to her only grandchild Kim, that was her most treasured out of all the positions she held. Every summer, Kim and Corrine could always be found around town or making a shopping trip to Nordstrom. Corrine never hesitated to pull out a wallet photo album of Kim whenever anyone asked how she was doing during the school year.

Corrine was always remembered as having a quick wit, the first to volunteer for something, and the one to help others, always quietly. Corrine never wanted notoriety for assisting others but was always willing to give of herself. She always had a gift at the ready, no matter the occasion. Her hand knit blankets were especially meaningful to those who received them.

Due to COVID-19, a private family burial was already held.

In lieu of flowers, donations can be made in Corrine’s name to the Ladies Philoptochos Society of the Resurrection Greek Orthodox Church, Castro Valley, CA.

Here’s to you, Mrs. Pleasanton. May your memory be eternal.