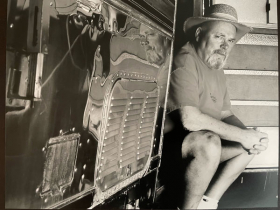 On Tuesday August 10, 2021, Dale Iven Poulson of Pleasanton passed away in his home at the age of 80. The family and friends of Dale are saddened to announce his passing.

Dale was born in Stratford, Iowa. His family relocated to San Lorenzo, California where he graduated high school. After graduation, Dale entered the United States merchant Marines. He moved to Pleasanton in 1971 with his young family. He raised his two children as a single dad and retired after 40 years of truck driving. Then the fun began! Dale attended burning man for 12 years. After meeting and marrying Rita, they enjoyed traveling in their classic airstream to Westport state beach with their dog Corby. Dale enjoyed going to garage sales and the antique flea market with Rita. Dale was a gifted gardener, skilled welder, and a talented woodworker. Dale was generous with his time, his talents, his tools, and his advice. Dale was quite a storyteller and could strike up a conversation with anyone.

Dale is survived by his loving wife of 16 years, Rita, his sister Carol, his son Ed, his daughter Daleen, and his five grandchildren.