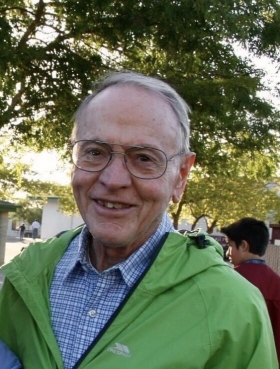 Don Peters passed away on April 13, 2020 after a battle with cancer. He was born on Feb. 9, 1936, the first child of Betty and Dave Peters. The family had fruit orchards in the San Jose area for several generations and Don attended the same kindergarten at Willow Glen school that his grandmother had attended. He was in the first graduating class from Willow Glen High School and earned his engineering degree from San Jose State where he met his wife, Ann Stikeman Peters, on a ski club trip. After working a year for the Navy in Pasadena, he was hired by UC at Lawrence Livermore Lab. He continued to work for the UC system for over 30 years, retiring from UCSF. He enjoyed camping, backpacking and spending time at the family cabin at Lake Tahoe. He was a private pilot with the Flying Particles and late flew sail planes from Hummingbird Haven outside of Livermore. After retiring he and his wife went on more than 20 hiking trips with Elderhostel/Road Scholar in many parts of the world. They also spent three summers as volunteer interpretive aides at Lassen Volcanic National Park Don spent several years as a volunteer for the Livermore Police Department, but the love of his retirement was the time he spent volunteering for the Livermore/Pleasanton Fire Department. He helped their IT group for over 15,000 hours over 15 plus years. Don is survived by his wife, Ann, as well as three sons, Karl(Janet), Kurt(Mel), Jeff(Kelly). He was immensely proud of all of them. He dearly loved his grandchildren, Kassidy, Sheridan, Jeannette and Bryan. He also leaves his brother, Gary (Sheryl), and sister, Jean as well as a large extended family. He will be sadly missed by family, friends, and his fire department family. At his request, there will be no services.