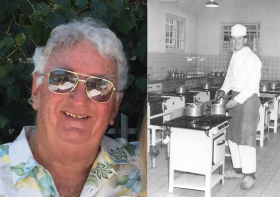 Harm Ottens, a beloved longtime resident of Pleasanton, died on September 6, 2022 in Bend, Oregon at the age of 88. Harm, also known as Dutch, was born in Onnen, The Netherlands on September 2, 1934, the son of Aldert and Bouwina Ottens.

In 1955, at the age of 21, he immigrated to the United States. He was a cook in the Dutch military, then at Fort Ord in Monterey California for the U.S. Army Officers Club, where he eventually became a proud citizen.

He was sponsored by his sister, Janna, and her husband Jannes Takens. He worked at the Meadowlark Dairy for a short time, and then became a bartender, most notably at Castlewood Country Club and Hap’s Restaurant. He was a regular golfer, loved soccer, and always had a series of jokes to share with anyone willing to listen. In later years, he and his wife Carol established and ran “Carol’s Guest Home” a home for the elderly. Of course, Harm was the cook, something he thoroughly loved. He was also the one that prepared turkeys for our large Thanksgiving dinners that typically sat 30 – 40 people.

Harm was preceded in death by his wife of 44 years Carol, his parents Aldert and Bouwina Ottens, his sister Janna (Jannes) Takens, and his brother Bey (Fenny) Ottens.

A private celebration of life will be held for the immediate family.