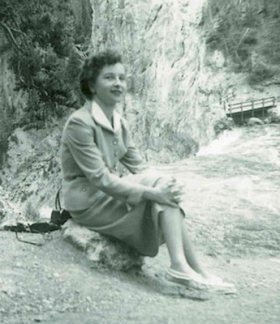 Mary Valeria Cerro was born on September 5, 1925 in Redding, CA to Agnes and Joseph Cerro, immigrants from Italy. Over the next five years she became a big sister to Aurora, Alfred and Lena. Her family shared a ranch with Mary’s uncle and his family. She grew up with her five cousins, Louie, Pete, Charlie, Gemma and Amelia, who she thought of as siblings. After graduating with honors from high school, she got a job in the steno pool at McClellan Field in Sacramento during World War II. In May 1945, she took a job at the Bank of America in Redding as the bank manager’s secretary. Eventually she transferred to the Bank of America in Burlingame, CA where she enjoyed her job very much. In 1954 she met Leo Barsotti at a Young Italian Catholics dance in San Francisco. On January 29, 1955 they were married. Within a few years their family expanded to five with the births of Cathy, Peggy and Jim.

As a fulltime mother and homemaker (era una buona cuoca Italiana!), her kind and giving character was evident also outside of their home. She loved welcoming her children’s many friends into their family. Together with other early volunteers, she helped families in Pleasanton who needed hospice services. This small volunteer organization grew into what today is Hope Hospice (which provided wonderful care for Mary, and Leo in their last days). A member of the Catholic Community of Pleasanton, St. Augustine Church, for 56 years, she often attended daily mass.

Throughout the years, she traveled with Leo to many places near and far. She was an avid walker, especially in local parks where she enjoyed greeting every dog or young child she came across. She also enjoyed spending time with family and friends, especially her donut shop buddies and Spanish Club ladies. Family was a priority to her, especially her granddaughters, who were amongst some of her greatest joys in life.

Mary was predeceased by her loving husband Leo, her beloved parents, her three wonderful siblings and Redding cousins. She is survived by her children Catherine (Robert Johnston), Peggy (Marty McCaslin), James (Carme Barsotti); four granddaughters Rachel Seymour (Kaleb Seymour), Ruth Barsotti, Rebecca Barsotti and Faith Barsotti; brother-in-law, Frank Venturelli; and many nephews and nieces. She also leaves behind some very dear friends that she kept in contact with until the end and the many nurses and caretakers she befriended in her retirement community. While mom will be greatly missed, we celebrate that she is reunited with dad and her big Italian family she has missed so dearly.

A funeral mass will be celebrated at 10:00am on August 20, 2021 at St. Augustine’s Church, 3999 Bernal Ave, Pleasanton, CA, followed by interment at Skylawn Memorial Park in San Mateo, CA.

The family has asked that memorial donations be made to Hope Hospice or a charity of your choice.