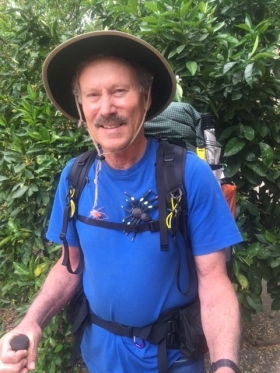 Robert "Bob" Thompson passed away unexpectedly at the age of 71. He was a wonderful musician, as well as a skilled athlete and tradesman who loved spending time outdoors. He touched many lives with his generosity and loved to entertain others with his great sense of humor.

Bob was born in Richmond, CA on Aug. 21, 1949. After receiving his pilot’s license, he left home to serve in the United States Air Force as an airplane mechanic during the Vietnam war. Upon returning home in 1971, he went on to pursue his bachelor’s degree in music at Sonoma State University. Bob maintained a lifelong passion for music. He especially loved practicing with his band members and playing guitar every morning in the music hut that he built.

Bob ultimately settled for a career in telecommunications. He worked for PG&E for 30 years until his retirement in 2011. Bob loved retirement and kept himself busy with new challenges and adventures. In 2014, he embarked on a journey to receive his helicopter pilot’s license. He also took up an interest in backpacking and hiked portions of the Pacific Crest Trail and Tahoe Rim Trail. Bob stayed active by taking dance lessons, going on bike rides, and playing in tennis tournaments. He liked to brag that he could outrun a 30-year-old any day on the court.

Bob is preceded in death by his wife, Gayle Yost-Thompson, who passed away in 2009. He vowed that he would honor her memory by living every day to its fullest and by continuing to be a loving, inspiring, and devoted father. He is survived by his daughter, Erin Yost Thompson; his son, Kevin Yost Thompson; his brothers, Donald and Greg Thompson; his sister, Supriya Kathleen Deas, and his step-sisters, Susan Thompson and Elizabeth Elewski.

Bob’s wishes were to be cremated and to have his ashes spread in Yosemite. A celebration of life ceremony will be held in his honor. Donations can be made to the Sierra Club Foundation, the Brain Aneurysm Foundation, or a charity of your choosing.