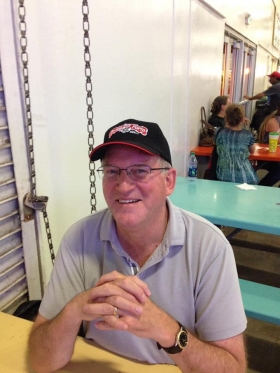 Scott was born in Concord, California to Ed and Robert Kinney on October 4, 1961. He went to high school at Amador Valley in Pleasanton and graduated in 1980. He went on to earn a football scholarship to the University of Pacific in Stockton as a kicker.

Scott worked as an Insurance Broker for Epic Brokers in Concord, California. He enjoyed spending time with his family, taking lake vacations, and attending sporting events.

Scott was preceded in death by his father Ed.

Scott was also known as one of the most upbeat, friendliest people, and could always be counted on the leave his friends with a smile on their faces and laughter in their hearts.

He will also be remembered for being dependable and conscientious, always putting the needs of others before his own.

Scott was a star on the athletic fields, playing goalie for the highly touted Amador Valley soccer team, helping to lead the team in the No. 1 national ranking in his junior year.

Scott was also the kicker for the Amador football team, holding the school record for longest field goal at one point.

The Kinney’s were an iconic Pleasanton family in the 1970-1990’s, with Ed serving as Mayor of Pleasanton, as well as the regular announcer for the well-known Pleasanton Good Times parade.

Scott, along with his younger brother Brad, embraced the larger-than-life image that Ed brought to the community. Both regularly went out of their way to make anyone they met feel comfortable, with Scott sporting that famous Kinney smile.

There will be a private family service for Scott. There is a Celebration event planned for Scott, with the dates to be announced following COVID-19 protocols.