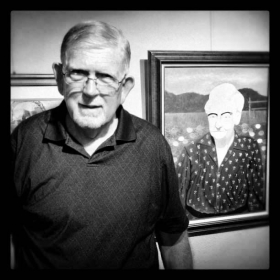 Stanley Dale Vierk liked to call himself “just a country boy.” He grew up in Cairo, Nebraska, son of the town mechanic, Victor Vierk, and grandson of the local mailman. As a teenager in rural Nebraska, he was curious about everything, whether that was fixing cars, operating a printing press, or learning polkas on the harmonica to impress the girls at the Czech-German club. After a stint in the Army during the Korean War, Stan came back to attend the University of Nebraska, where he graduated with a degree in chemistry and met the love of his life, Margaret “Susie” Powell. They married, and over the years, had five children and lived in Nebraska, Iowa, Washington and finally California. In the 1970s, Stanley began working in the new field of computer technology in Silicon Valley. His last job was at Seagate Technology, where he worked as an engineering manager, developing substrates for hard disks. During this time, Stanley went back to painting, a pastime he picked up in the army. He was active in the Pleasanton Art League and the Livermore Art Association and won awards for his paintings at Tri-Valley shows. Stanley is survived by his children: Victoria Kazarian, Pamela Ballin, Matthew Vierk and Kerry Nozicka; his sons- and daughter-in-law Peter Kazarian, Matthew Ballin, Paul Nozicka and Claire Vierk; and his grandchildren Peter Jules Kazarian, Armen Kazarian, Lisa Kazarian, Emily Ballin, Moss Ballin, Braeton Nozicka and London Nozicka—and a great-grandson, Isaac Immanuel Kazarian.