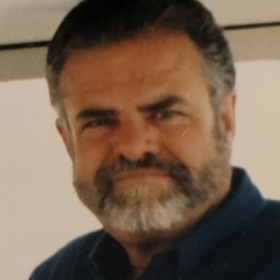 Stephen was born in San Francisco during the summer of 1940 to parents Hazel Garatti Kalthoff and Herbert Kalthoff. Stephen’s family eventually moved to San Leandro to be closer to his extended Italian-American family in Pleasanton and Livermore. He grew up largely in the vineyards and wineries of Pleasanton, including his grandfather Frank’s eponymous Garatti winery. A curly haired young boy, Stephen was adored by his family for his boundless energy, sharp intelligence, and sense of humor.

He graduated from St. Joseph’s High School in Alameda and received his bachelors degree from USF and MBA from UC Berkeley. During his college years he worked for Southern Pacific Railroad where he developed a life long love affair with trains. As children he would take us to watch trains at all hours of the day and night. He knew every schedule. He even planned trips along rail lines throughout the U.S. and the world; taking the Trans Siberian Railroad with his brother Phil and nephew Brian in 1993 and most recently with his daughters through Texas in 2018.

Stephen married Alice Painter in 1964 and moved to San Antonio, TX to join the Air Force. When he returned, he accepted a position with Consolidated Freightways in Menlo Park and remained there for over 25 years. During this period, he also developed his grandfather’s “Escondido Vineyard” into a successful business, selling grapes to Wente and several smaller wineries in the area for decades. As family business, we spent many weekends and summers working the land; we camped, hunted, moved irrigation pipe, and picked grapes. He instilled an unshakable work ethic in us, for which we are so grateful.

As a third generation vintner in the Livermore Valley, Stephen served as President of the Livermore Valley Winegrowers Association, chaired the South Livermore Valley Development Planning Committee, and was elected to the Board of Directors of the Alameda County Water and Conservation District (Zone 7). He was very active socially and politically in the Tri-Valley and San Francisco where he was a deacon at Saint Peter and Paul Church in North Beach.

Stephen had an amazing life. He was a renaissance man in every sense of the word. He could be the executive in a suit one moment and in overalls working on a tractor the next. He was an avid reader, hunter, farmer, historian, and traveler. He was member of the Commonwealth Club of San Francisco and an Eastern European history buff. He lived life to it’s fullest and never succumbed to fear. As a father he taught us to work hard, dream big, and be brave. We will always remember him as bigger than life, both in stature and personality, and completely irreplaceable. He was truly one in a million.

He is survived by his beloved daughter’s Katherine (Scott) Kalthoff Eby and Janet Toliver; grandchildren Steven, Sofia, Julia, Ava, and Scotty (Calica); dear friend Mary; and ex wife and good friend, Alice; and many cousins, nieces, and nephews. He was preceded in death by his parents, Hazel and Herbert, his dear brother Philip, and his daughter Lisa.

The family is grateful for all the condolences and remembrances. Donations can be sent to Tri-Valley Conservancy.