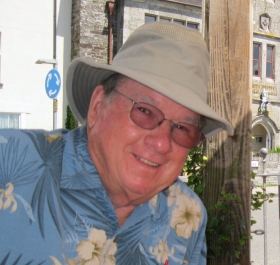 Thomas John Sheridan passed away peacefully surrounded by family on Monday, October 12, 2020 at the age of 78. Tom was the first of seven children born to Thomas and Phyllis Sheridan on October 25, 1941 in Oakland, California. He attended St. Elizabeth Elementary and High School where he read every book in the library and became passionate about basketball.

Tom spent his childhood summers at the family lodge in the Lakes Basin Area of Northern California. He learned the value of hard work - making beds, doing dishes, cooking, repairing pipes and entertaining guests, and developed a life-long love of the mountains, returning there throughout his life.

Tom earned a four-year basketball scholarship to St. Mary’s College in Moraga, where he earned a baccalaureate degree in economics and established friendships that lasted a lifetime. Upon graduating, he worked for Del Monte Foods and as a real estate agent in Arizona. He then found his calling as an educator and spent 30 years as a teacher, coach, athletic director and/or administrator in San Lorenzo and Pleasanton, California. He was a committed teacher in and out of the classroom, encouraging students and inspiring a desire to learn in those closest to him.

Tom was an exceptional high school and college basketball official. He spent a number of years traveling the west coast officiating hundreds of games, his young children watching for the nod he would give them on TV. His other hobbies included friendly poker and dice games, reading, walking and listening to a variety of musical genres. He was also known to pick a horse or two for the Kentucky Derby. He loved a good barbeque, working in his garden, playing basketball with his friends, son, grandson and brothers, and spending time with his family.

Tom made many friends throughout his life and was known for his quick wit and sense of humor. He was an avid explorer, whose curiosity about the world took him on many long drives across the United States. He stopped in little ‘hole-in-the-wall’ bars or cafes in hopes of hearing local music or to chat with new people. He always returned with a story. He settled in Portola in his later years, found great joy in observing life as it happened outside his window, and loved to watch his grandsons learn, play and grow.

Tom is preceded in death by his brother Robert and his parents Thomas and Phyllis.

He will be greatly missed by his three children, Kelly, Tom (Sen), and Megan (Ricardo); his grandchildren Javier, Noah and Samuel; his siblings Kathleen, Dan, Bill, Ann and Phyllis; numerous nieces and nephews; and all those he met along the path of his life’s adventure.

There will be a private family celebration of life. Please make any donations, in lieu of flowers, to the Cystic Fibrosis Foundation (www.cff.org) or the Nature Conservancy (www.nature.org).