﻿ The Art of Bill DiMichele: Cross Section of a Moment | Art Space | John A. Barry And Bill Carmel | DanvilleSanRamon.com |

The Art of Bill DiMichele: Cross Section of a Moment

The exhibit features four series: “The Cross Section of a Moment,” “The Alphabet of Everything,” the “Arc Series,” and the “Organism Art Series.” The first DiMichele painting I saw, more than 15 years ago, was one of the “Cross Section” pieces—acrylic paintings on paper board. I knew I was seeing something special. Looking at them now brings back many of the same feelings I had then. From a distance, each one contains a large circular element that looks like a kind of torus (doughnut shape) made of colorful shapes, alive in a geometric soup. Move closer, and it resembles a wild, writhing kaleidoscope of angular, colorful shapes. Up close, it looks as if the artist scratched and scrubbed the surface of the board to reveal one painted moment. Viewed sequentially, they are like a time-lapse documentary of a journey toward the center of the earth. The lines cut by the artist’s blade and ripped by the artist’s hands into the paint and thick paper boards closely resemble the dance of the strings in the “Alphabet” series paintings. 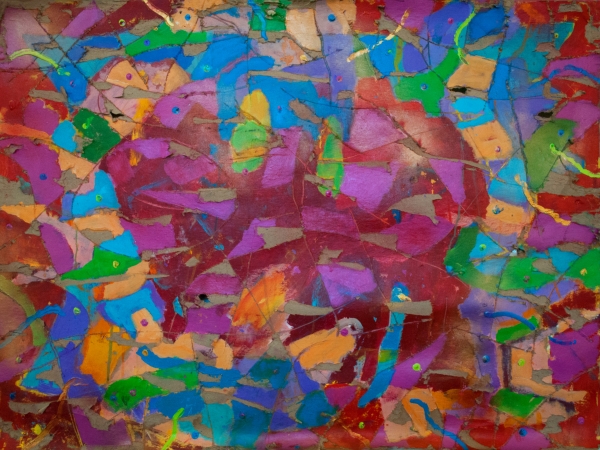 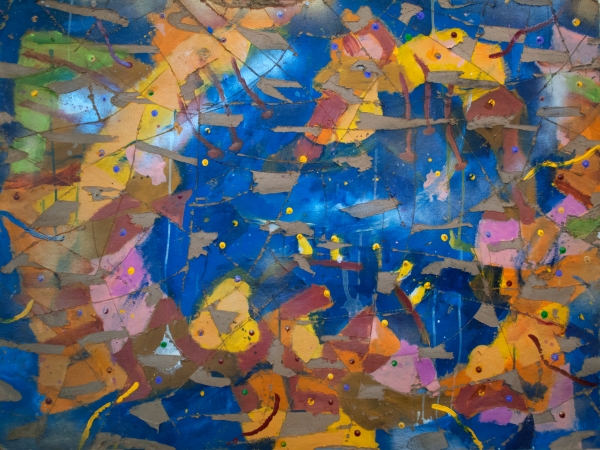 A film I saw in the early 1970s, El Topo (the mole), by Alejandro Jodorowsky, reminds me of these paintings. The following is a paraphrase of the opening: The mole is born in the earth. All its life, it claws and tunnels through the soil, hunting for grubs and rooting for a way into the light. Then, just as it seems that life in this dank world will never end, it breaks through the surface into the light that blinds it.

Even though DiMichele was extremely private about his art, he edited a blog, The Tip of the Knife (http://tipoftheknife.blogspot.com) that features visual artists who made work about proto-alphabets and poets who use words in a symbolic and visual way—visual poetry. He was especially interested in work that hinted at the kind of metaphor in which shape resembles sounds and sounds construct symbolic form. His fascination with things that vibrate may begin to explain his music (and lyrics), the paintings, and the primal interrelationships between images and sounds. Visceral stuff. Here is DiMichele’s artist’s statement that ends each of the 33 blog editions:

Bill diMichele was born on the top of a steel mill smokestack. his crib was made of slag, his toys made of coal. when he was of age, he was apprenticed to a Native American tribe where he learned sand painting on the high banks of the monongahela river. when his head and hands were full, he joined persephone, learning how to manipulate the seasons and use hallucinogenic pomegranate seeds to understand the world beyond the world. He learned the gathas from zoroaster, staining canvas from morris louis, the qabalah from gikatilla, and pizza spinning from rahim, an emissary of a secret persian pizza society. Oh yeah—he did some visual poetry.

Throughout his creative career, DiMichele was subjected to the vagaries and insults of local artists who did not understand his art. He was the quintessential outsider artist. He contributed to the greater artistic community by publishing in his blogs the work of other artists. Despite being marginalized and discounted, DiMichele continued to make brilliant and beautiful paintings, poetry, and music. His work continues to be revered by artists from many communities across the country. This exhibition is joyful, masterful, and poignant. It is a triumph of the heart and spirit of an artist who would not yield to convention and continued to hone a vision that is alive and well.

Another component of DiMichele’s vision was his “Alphabet” series.

The Roman alphabet consists of 26 letters. With those 26 letters, one can describe
anything concrete (concrete) or abstract/theoretical (dark matter). In other words,
everything. The letters themselves can be concrete—the letter D sculpted from redwood, for example—or ephemeral bits in cyberspace.

As depicted, these letters can be hard-edged and angular or curvilinear: A a (uppercase and lowercase), for example. With the title of his “The Alphabet of Everything” series, artist Bill DiMichele melds the tiny alphabet with infinity. Most of the forms in these paintings are curvilinear and organic, but several are harder-edged. As with the alphabet, you see curvilinear and linear forms. Each “Alphabet” painting is divided into four horizontal quadrants, some more pronounced than others. In the text accompanying one of his “visual poems,” DiMichele mentions “only the fourth dimension,” a possible reference to the four quadrants.

In all the paintings, the artist demonstrates a tremendous sense and use of color. The colors in most of them are light and pastel, although three display a darker canvas. Two of these three bracket the rest. If you look carefully, you can see the image of a door, or a portal, in each. It’s as if you enter the “Alphabet” exhibit through one portal, take in the exhibit, and exit through the other portal. But you can stay as long as you like—and go out through the in door, if you are so inclined. 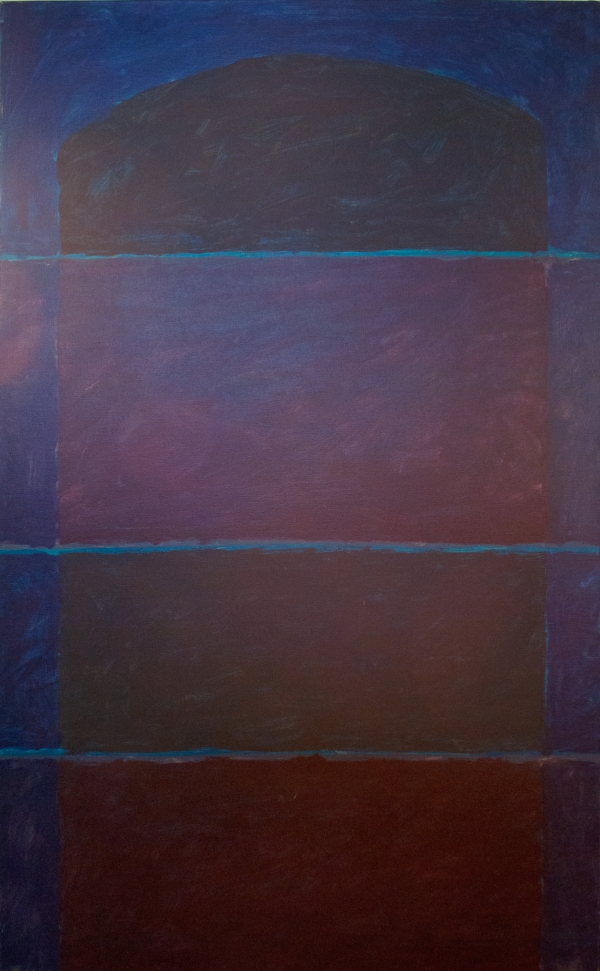 Because of the paintings’ abstract nature, you can see almost anything in each one,
depending on your experiences, interests, background, and so on. In the painting shown here, I see—at a quick glance—a tree, a spine, nerves, the biohazard symbol, strings—string theory, perhaps? In one issue of Tip of the Knife, DiMichele quotes physicist and author Brian Greene about a piece of digital art: “Our present formulation of string theory presupposes the existence of space and time with which strings move about and vibrate.” You will likely see something(s) entirely different in this painting. 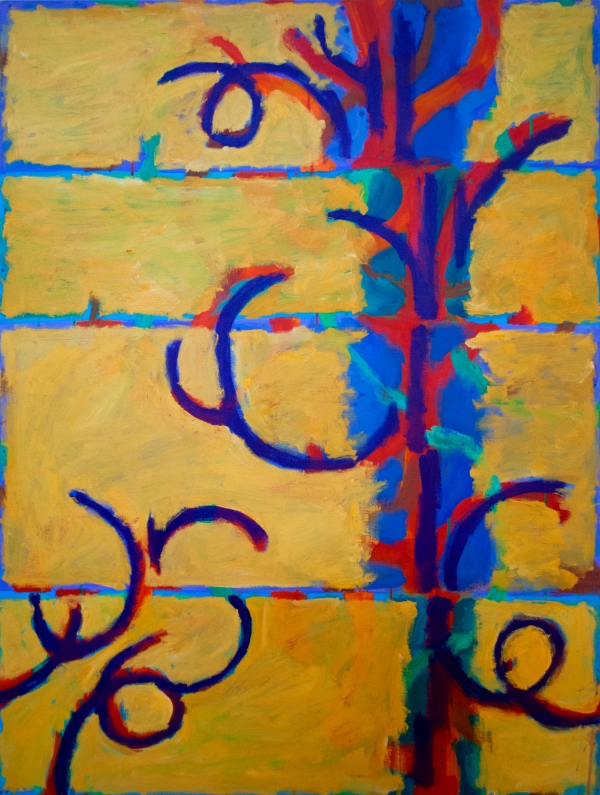 What do you see?

DiMichele may have had in mind when painting this series the Theory of Everything, a
hypothetical single, all-encompassing, coherent theoretical framework of physics that
fully explains and links together all physical aspects of the universe. (The Theory of
Everything is also a 2014 biopic about theoretical physicist Stephen Hawking.)

Due to DiMichele’s untimely passing, we are unable to ask the artist exactly what he had
in mind when he created this series. But with these well-crafted, thought-provoking abstract paintings, DiMichele challenges us to see something, or a great many things.

• The paintings in the “Alphabet” series are divided into four segments, representing the unfolding of space into the four dimensions we experience. String theory proposes a total of 11 dimensions.
• The vibrating strings fill the dimensions with all the varieties of matter, dark matter, energy, dark energy, and gravity.
• The vibrations of particles and dimensions create the dance of color, form, and space of our world.

A few of DiMichele’s haikus:

it’s in her belly
the universal drama
come to me, my tomb

hummingbirds like harps
nearly weightless, wrapped in light
they’re drunk all the time

antiparticles
the word i saw in heaven
annihilation

Tuesday, Wednesday, Friday: 10:30-5:30
Thursday hours are variable, depend on the minister’s schedule


Thanks Bill and John for the provocative art and descriptions of the art in this blog. You opened my eyes a bit.