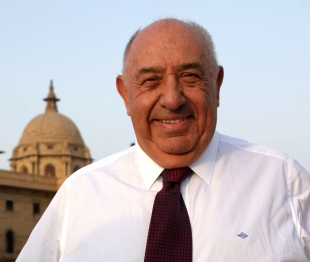 Kenneth E. Behring's life has been filled with remarkable achievements, but the ambitions that now motivate this businessman and philanthropist are among the most noble, as he strives to improve health conditions worldwide, educate young people and help develop the leaders of tomorrow.

"We're just, in a way, trying to do what we feel is something necessary," the 85-year-old Blackhawk resident said.

Born in Illinois and raised in Wisconsin, Behring grew up in a poverty-stricken family during the Great Depression. He worked a variety of jobs from an early age, entered car sales after high school, soon became a dealership owner and earned his first million by 27.

From there, Behring would embark on a truly extraordinary -- and lucrative -- business career that saw him create the retirement community of Tamarac, Fla. in the 1960s, develop Blackhawk here in the Tri-Valley beginning in 1977 and serve as majority owner of the National Football League's Seattle Seahawks from 1988-97.

But, as Behring describes, it wasn't until early 2000 (after placing a young, disabled Vietnamese girl in her first wheelchair) that he discovered "a life of purpose," leading to him becoming one of America's most committed philanthropists.

The happiness and sense of hope emanating from the girl impacted Behring deeply and motivated him greatly.

That June, Behring founded the Wheelchair Foundation, which aims "to create awareness of the needs and abilities of people with physical disabilities, to promote the joy of giving, create global friendship, and to deliver a wheelchair to every child, teen and adult in the world who needs one, but cannot afford one," according to its website.

By December 2000, the organization had distributed 20,000 wheelchairs across 65 countries.

The Wheelchair Foundation, now a division of Behring's Global Health and Education Foundation, has delivered or committed 940,675 wheelchairs to date worldwide, according to its website.

A contributor to a variety of charitable causes, Behring sees significance in efforts across the globe as well as close to home.

He is an active supporter of the University of California, Berkeley Principal Leadership Institute, which aims to train and develop educators who could lead some of the Bay Area's most underserved schools.

"What Berkeley has been able to accomplish is they go to the poorest schools and they find teachers that are very dedicated that do not have money to have continued education, but that are very, what they feel, qualified with what Berkeley can give them to come back and do much more in the schools than what they were doing as teachers," Behring said.

Through educational endeavors such as the Principal Leadership Institute, museums and National History Day, Behring hopes to help young people find a path toward making a true difference in the world.

"I think there's a possibility of a lot of young people becoming leaders. Leaders are not born, they have to be developed," he said. "I'm not talking about political leaders, I'm talking about the kind of leaders that can make a better world."

Behring, now in his later years, said he prefers to focus his time and energy on philanthropic ventures and business activities -- like participating in the stock market -- that help fund those causes.

"After you get to be a certain age, you don't really have ... I would rather work than take personal time," he explained. "I am going around the world all the time, so there's no place in the world that I want to go that I haven't been to or that I can't go to."

And the deep desire that continues to drive this Tri-Valley Hero is simple.

* The Behrings had five sons (one died) and have 10 grandchildren.

* Behring founded the Blackhawk Automotive Museum in 1988. He has also pledged some $100 million to the Smithsonian Institution museums.

* He sold the Seattle Seahawks for $200 million to Microsoft co-founder Paul Allen.

* Earlier this year, Behring released a new book, "The Road to Leadership: Finding a Life of Purpose." All proceeds benefit his Global Health and Education Foundation.

* Behring has called Blackhawk home for more than three decades: "I don't think there's any place with better weather, and then at least around where I'm at here, there's very little traffic. And the air is clean, water is good. So it's got everything going for it."

Ken Behring truly deserves this lifetime achievement award. With his wheelchair foundation, he is doing tremendous work for those who do not have the ability or money to buy a wheelchair. It gives them liberation and hope in living a purposeful life. Congrats to Mr. Behring and thank you for making the world a better place!

Rgf49er is a registered user.


Not surprise by the outcome or the behavior of the SRVSD. I'm glad th family had raised concern and now others will benefit. Too often the leading school district in Contra Costa County has made their own rules and it took a vocal parent to get the issue fix.

The Impact of COVID-19 on Our High School Juniors and Seniors
By Elizabeth LaScala | 0 comments | 2,517 views

The first few seconds after awakening; before I remember the virus
By Chandrama Anderson | 0 comments | 1,830 views

Stay up to date on local coronavirus coverage with our daily news digest email.