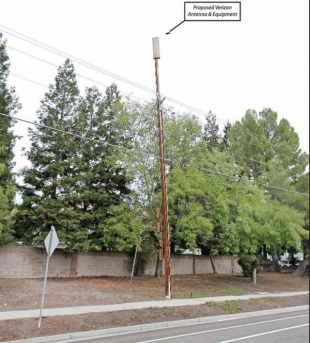 The proposed project would have consisted of the placement of panel antennas contained within a four-foot-tall radome on top of a six-foot extension of the pole and the mounting of related equipment on the lower portion of the pole. (image courtesy the town of Danville)

The Danville Town Council voted 4-1 to deny a land-use permit for a Verizon small cell wireless facility on Camino Tassajara on Tuesday night, backing a resident group's appeal in a decision that opens up the town to possible litigation from the telecommunications provider.

The decision to deny the permit was based on the council majority claiming that the proposed location was not the least intrusive site possible, that better alternative locations may exist and that the applicant had not adequately demonstrated the proposed facility would meet federal radio frequency standards -- all of which went against the recommendation of town staff.

"We've made a lot of difficult decisions over the years, and this one is right up there in my top three. But that is exactly why somebody elects us to do the right things," Mayor Robert Storer said while discussing the vote at Tuesday's meeting. "We've lost local control and this says: 'You know what? We are sick of this and we're not going to just sit here and be bulled over.' We say no; we play our cards out. We've been in lawsuits before."

A land-use permit for the cell facility -- owned by Verizon -- was approved by the Danville Planning Commission at its regular meeting on Oct. 23. The project consisted of the placement of panel antennas contained within a four-foot-tall radome on top of a six-foot extension of the pole and the mounting of related equipment on the lower portion of the pole on Camino Tassajara, approximately 225 feet east of Gatetree Drive.

The installation's original approval came over the objections of residents from Danville Citizens for Responsible Growth (DCRG), who on Nov. 2 filed the appeal challenging the decision.

The nearly five-hour meeting Tuesday was less-attended than last month's lengthy public discussion on the issue, but was just as hotly contested, with applause, yelling and even jeers thrown from those in attendance.

According to city attorney Robert Ewing, the installation of wireless cell facilities is heavily regulated by the federal and state government, which limit local government's authority to install its own regulations, but that the town was not without options.

While perceived health concerns over the radio frequency emitted from cell facilities were one of the most prevalent topics of conversation among residents during the public comment, town officials maintained that due to Federal Communications Commission's regulations, the town is not allowed to consider health risks when making a decision.

"While potential health concerns are a huge concern, if that was the basis on which you were making a decision I would be fairly confident to tell you that you would lose, because that's about as clear as the law can get," Ewing said at the meeting. "As much as I understand the concern folks have over safety, what I can tell you is that if you make a finding based on potential health impacts of RF, then I will tell you that my opinion is you would lose."

Verizon's legal representative, Paul Albritton, stressed that the proposed facility would be far below the FCC-mandated RF levels, and that a cellphone has the capacity to produce the same levels as the facility.

"There are now more cellphones than people in the United States. When we started 30 years ago, there were none and you don't see any of the dire or terrible, dramatic changes that were forecasted... I'll say this, because at .25% of the federal standard, it's safer than this in my pocket," he said motioning toward his cellphone.

In the end, the council found that Verizon did not adequately prove that the site on Camino Tassajara was the least intrusive location for its equipment, and that its report on radio frequency levels for the proposed facility was inadequate.

While the council has denied the permit for this specific location, Storer acknowledged that through litigation it is still possible for Verizon to be granted access to the utility pole through a court decision.

The lone dissenting vote came from Vice Mayor Karen Stepper, who agreed with Verizon that it was the least intrusive site and worried about the precedent of moving the proposed sites from one house to another.

"I am a strong proponent for having these in the right-of-way for utilities. I'm a strong proponent of the technology that underlies the economy of Danville, and I believe this is the least intrusive site because it is screened from view (and) not just visually," she added later, after the vote had been cast.

"We are going to end up right back here and we are going to approve a site. This is just a step to see if there is anything else we can grab, but we will have these sites in Danville. We will not stop these," Arnerich said.

The meeting closed with a plea from council members for residents to reach out to lawmakers and advocate for increased local controls over issues such as the instillation of cellular facilities in municipal borders.

"What we need to do to make sure that we gain that local control. You cannot walk out of here and say we won by having this cell site moved somewhere else," Councilwoman Renee Morgan said. "The point is to go out there and talk to your state legislators, and make sure that they understand that we as the town of Danville, deserve to tell people where we want to put these things -- not have them dictate it to us."

Many thanks to our city council members for again doing the right thing for the citizens of danville.

Like an army of ants trying to change the direction of a Sherman tank. Lol

hamilton is a registered user.


So glad for this decision!

Report Objectionable Content
Email Town Square Moderator
6 people like this
Posted by Karin
a resident of Danville
on Mar 7, 2019 at 4:32 pm

Very happy that the Council listened to the appeals and voted in favor of how the majority of citizens felt about this matter.

Report Objectionable Content
Email Town Square Moderator
5 people like this
Posted by jo
a resident of Danville
on Mar 8, 2019 at 2:50 am

Just another bunch of NIMBY's - sad. But they all want cell phones - just not where they might see them...

Report Objectionable Content
Email Town Square Moderator
10 people like this
Posted by Michael
a resident of Danville
on Mar 8, 2019 at 10:25 am

Jo - it's not appropriate to bully or name call other people, especially as an adult, you should know that's not appropriate behavior. This has nothing to do with "NIMBY". The people who are opposed to this technology are trying to protect ALL OF US - even you! We wouldn't be wasting our time fighting it, if it was proven to be safe. We know that even lower frequencies within the non-ionizing radiofrequency spectrum are known to cause a variety of illnesses. While you, personally, might not yet be affected, there will come a time when you've had one exposure too many. You could become electro-magnetic hypersensitive, meaning that anytime you're in the vicinity of man-made microwave radiation, your body starts to hurt and burn. People have had to drop out of society and live off the grid to avoid the already overwhelming exposure we all have to microwave radiation. There is no reasonable argument, no logic, in deploying a Close-Proximity Microwave Radiation Antenna ("small cell") near someone's home or on school property. Is your cell phone or access to all your devices simultaneously so important that you'd risk other's lives, simply because you are ok with it? That's not a fair, nor selfless, reason. Now if your real objective is for faster internet, you can start pushing the town for fiber to the home. If you have an ulterior motive, maybe because you work in the wireless industry, then you should disclose that as it reflects a bias. Hope you have a wonderful, technologically balanced day.

Magnus Back is a registered user.


While I understand people might be concerned over health this wasn't a very good decision.
Local governments are precluded from making decision based on health because they are unqualified to do so.
In this case they city hid behind the location of the site and used that as a pretense.
If that was a bad location I'm all for it. It really wasn't.
Bad governing.

Hazel Sale is a registered user.


"There is no reasonable argument, no logic, in deploying a Close-Proximity Microwave Radiation Antenna ("small cell") near someone's home or on school property. Is your cell phone or access to all your devices simultaneously so important that you'd risk other's lives, simply because you are ok with it? That's not a fair, nor selfless, reason. Now if your real objective is for faster internet, you can start pushing the town for fiber to the home." I 100% AGREE! This is so completely true. I feel like we have completely given over our health to the name of progress...BLECH!
- Hazel - Web Link

The first few seconds after awakening; before I remember the virus
By Chandrama Anderson | 0 comments | 3,166 views