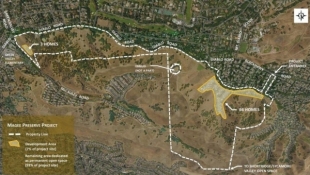 The Magee Preserve development project would develop approximately 29 acres (or 7%) of the Hap Magee Ranch property, with the remaining 381 acres of open space permanently preserved. (image courtesy the town of Danville)

I have read with interest the comments coming from the developer and Town Council members. I have been a resident of Danville since 1991. I must say every developer that wanted to build in this city didn't care how the development would change the area and detract from the quality of life here. Most residents enjoy the open space which is in such limited supply. The town just wants the revenue generated from development and the developer really doesn't care about the community, just money.

I never saw the petitioners in my neighborhood, but if I had I would have gladly signed the petition. It is all about stopping more development, less noise, cars, pollution, and congestion. If you live off of Camino Tassajara, you know that the road is used by San Ramon and Dublin residents as a short cut. There is so much traffic and congestion.

Highly unacceptable reaction by Town Council members to the first-person accounts of harassment, stalking, assaulting, and other abusive and even illegal activities by thugs handing out Davidon's flyers. The flyers were not truthful. Davidon claimed there will be (1)381 acres of PUBLIC open space being dedicated as part of the project (in fact there will be no dedication of public open space), and that (2)the project will provide safer "alternatives" for bicyclists that now ride the incredibly dangerous, substandard, winding Diablo Road east of Green Valley Road. The project will in fact provide NO SAFETY IMPROVEMENTS to Diablo Road, let alone an "alternative" to Diablo Road, for bicyclists.

Instead of calling out the thuggish behavior, and patently false information, the Council members were not bothered by the behavior. Instead, they acted as if they were Davidon reps and accused Danville Open Space Committee signature gatherers of lying to get signatures. Meanwhile, Davidon reps weren't even at the meeting. How nice of the Council members to sub in for them.

Tellingly, the Council members could not specify any "lies" that were told. That's because Danville Open Space Committee signatures gatherers had no need to lie---the facts of the appalling project speak for themselves.


Report Objectionable Content
Email Town Square Moderator
5 people like this
Posted by Jeff
a resident of Danville
on Sep 19, 2019 at 3:08 pm

Save Open Space Danville = Diablo NIMBY's. It's a shame that Maryann Cella & her agenda have any momentum at this point in time. Build the homes and give us the open space!

Sincerely,
Danville Resident in favor of this beautiful development

Sandy Varco is a registered user.


If the major problem expressed is the traffic and bikers, then take another look.
The developer is committed to a bike path on the property which would eliminate the bike problem on Diablo Road.

Overall, this is a great plan and I look forward to hiking in all of the dedicated open space...that we cannot access now. I find it sad to read the previous messages because being a 53 year homeowner in Danville, I cherish this community more than I can say and gave 16 years of unpaid time on the Design Review Board. A huge amount of effort has gone into this project. Give it a chance.

For those who are so negative - how about changing your attitude and volunteer to help our community. Why did you buy into Danville? No city/town stays the same forever and when a great project comes along, grab it, run with it and help to make it a superb addition.

Sandy from the Westside

extra note: I was asked to sign the petition and respectfully asked some questions of the petitioner. He was being PAID, did not live here and came from the LA area.

Report Objectionable Content
Email Town Square Moderator
16 people like this
Posted by Mike
a resident of Danville
on Sep 19, 2019 at 9:55 pm

The open space is perfect for cows but can not compete with Las Trampas, Diablo Foothills, Mt Diablo, Sycamore and Morgan territory parks. The project does not improve Danville by adding traffic and more houses. San Ramon and Dublin are gold mines if that all it takes to improve a city. If you are interested in moving to enjoy more traffic and houses be my guest. I will stay in Danville and enjoy less houses and traffic than most of the bay area cities. The City of Danville needs to look at the budget if they are enamored with more tax income. I will continue to donate to organization that seek to bridge the existing parks and expand the parks. But the strings on this deal for such a small chunk of land are terrible. The voters get to decide this because the citizens of Danville has decided you can not just rezone ranch land into a housing development with out a vote. The city council should represent the citizens of Danville not the housing developments of Danville.

Anyone who has driven in that area, especially at commute times, knows what a major problem the extra traffic this project will facilitate will present. But, beyond that bit of common sense, all we wanted all along was a public vote consistent with the requirements of Measure S, which the Council attempted to circumvented in approving this project in initially. I hope both "sides" will live with the election results next March - I will certainly will.

Report Objectionable Content
Email Town Square Moderator
7 people like this
Posted by KellyGamble
a resident of San Ramon
on Oct 7, 2019 at 10:50 pm

KellyGamble is a registered user.


I’m just wondering exactly when is enough? This will bring THOUSANDS more to our roads, schools, budget, chaos, on top of the dozens of other housing development projects all around us. The changes are too rapid for the existing communities to absorb without a major imposition on everyone involved and everybody else who has to deal with all these new residents and all that goes with it. Someone mentioned how great it would be to have new hiking trails. What I think would be great is if we had room to breathe. I think it would also be great if it didn’t take 20 minutes to drive a mile at certain times in Danville, San Ramon, Walnut Creek, Danville, Dublin. The Bay Area is literally a maze of trails and rec sites so we are not short on those resources. In fact, this entire state is chock full. I told my husband that the powers that be at the top who permit/promote all of this development don’t recognize that, at a certain point, the commute is going to start the moment you pull out of your driveway. The buck has to stop somewhere, doesn’t it? Maybe not....

Report Objectionable Content
Email Town Square Moderator
2 people like this
Posted by Dr. Ralph Gunderson
a resident of Danville
on Oct 29, 2019 at 6:06 pm

Davidon hosted the first (and probably only) pumpkin patch event on October 26th. It was PATHETIC. Steve Abbs, VP of Davidon, told lie after lie about the development. He even said that because of his company, that was the only way cyclists would get a trail (failed to mention it will cost US the TAXPAYERS about $4 million dollars). Only about 35-40 people attended. There were at least 8 photographers and videographers there and an annoying drone that followed us up the trail and stayed overhead while the children got their pumpkins. Davidon informed everyone who attended that we'd need to sign a waiver for our pictures to be published. It was so transparent, the whole thing. Such crap trying to tell us that this is "for the community". We are being deeded NOTHING on that property. The entire event was a marketing ploy. Kari Gunderson (no relation) was there handing out filthy water from a cooler with dirt in it, Tom Magee was making up stories about his dad - "poor Jed" and the rest of the family, and good ol' Seth Adams was shamelessly plugging Save Mt Diablo. Tom failed to mention the millions his family has tied up in two financial investment corporations - Teardrop Partners with its silent partners. They are not a nice family, trying to do right for the community. They are trying to profit and the town council is helping them do it. It absolutely fascinates me to see the sheeple who claim to be all about the open space and the environment supporting a developer who wants to destroy the land. They've marketed this in such a clever way, admittedly, that people think they're doing a great thing by allowing this development to happen all across that beautiful set of hills. Shameful behavior by the Danville Town Council, by Davidon Homes, by Save Mt Diablo, and by the Magee family (who, by the way, had trash all over the property - an old water heater in the ravine, rusty pipes everywhere, slightly hidden from the trail but we wandered around a bit). If you want this crap in Danville, you're DESTROYING open space. It's a fact.

You Can Help: Scents and Migraines
By Chandrama Anderson | 0 comments | 882 views